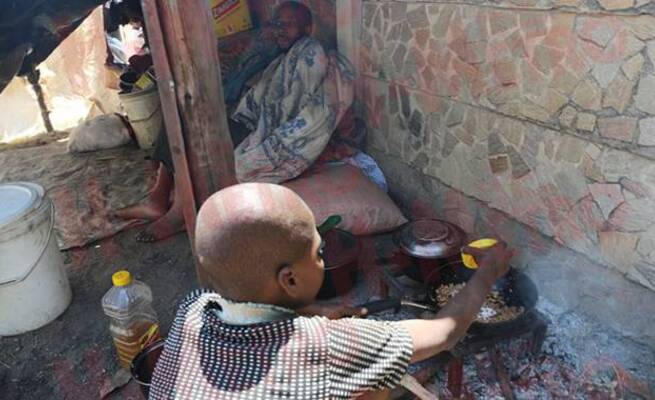 FOUR children of 38-year-old man have been exposed to cold weather for the past two days after their ailing father was locked outside in Chitungwiza.

There are genuine fears that Interogate Soroti’s children’s life is in danger as they require shelter.

The children who are both below the age of 10 could be seen struggling in helping their mother in preparing a meal after residents provided them with a temporary shelter by the gate.

Their woes mounted after the father’s younger brother Hondo Soroti, 28, locked them outside.

Some of the neighbours were threatening to beat up Hondo while others sympathised with the ailing man and his children.

The elder child could be seen blowing air to make firewood burn quickly for the relish that included chunks while the mother was nursing the youngest.

It was a letter thrown at one of the neighbours written by their father’s brother that forced the neighbours to gather as they wanted to capture every sentence behind the locking of his brother’s family outside.

Neighbours informed the Ward Councillor Tumai Magadzire who dismissed the speculation of coronavirus after reading the letter behind the exposing of the family outside promising the neighbours to take the issue to law enforcement agencies.

“We thought the letter had contents of suspecting his brother of coronavirus only to find that he was after settling his personal vendettas with his ailing brother,” said Cllr Magadzire.

“If he had bad blood with his ailing brother, he was supposed to accommodate the children because they are too young to undergo such a mistreatment.

“I am going to engage police so that the issue is addressed amicably for the good of the children,” said Cllr Magadzire.

H-Metro established that the ailing father was reported to have been sick for the past year and was not among the people suspected of coronavirus as what the brother wanted the neighbours to believe.