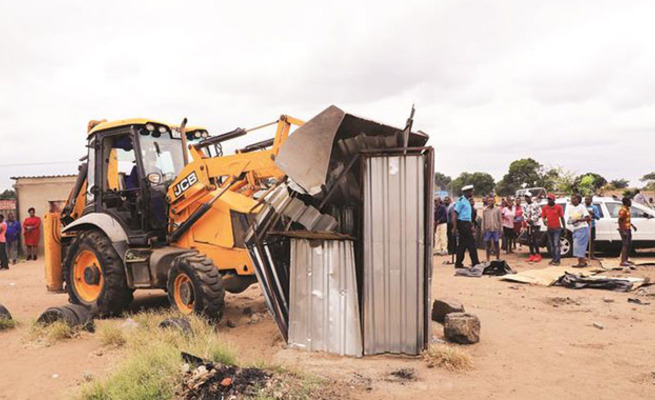 Harare City Council teams over the weekend demolished vendors’ illegal cabins and stalls in Mbare and Highfield, but vendors complained that the destruction was done before the promised new market areas had been developed.

While council announced that it would start developing new market areas today, and that it had no intention of destroying livelihoods, the vendors said it would have been better to have allowed them to move to the new sites first.

On Saturday, council workmen descended on Mbare and yesterday visited Machipisa and other places in Highfield.

Commenting on the issue to Zimpapers TV Network on Saturday, spokesperson for Harare City Council Mr Michael Chideme said the municipality was taking advantage of low human traffic during the lockdown to move the stands to properly designated sites.

“The people who were trading on this site will be put in a new complex, so on Monday (today) our teams will be working on the new complex, flattening out, pouring concrete and then marking the vending bays.

“The overflow from this market, will be absorbed at the market under construction at Coca Cola. You will also realise that we have people who are selling here who had abandoned the Mupedzanhamo market and some who had abandoned the other markets at Mbare Musika. They will go back to their original vending sites,” Mr Chideme said.

When The Herald arrived at Machipisa Shopping Centre yesterday, hundreds of vendors were salvaging materials from the destroyed cabins.

Most of them had no kind words for the city fathers and said council should have provided alternatives first before destroying the existing cabins.

A Machipisa resident, Mrs Tabeth Rungano who had her cabin demolished, said her source of income had been destroyed.

“Yes we are aware that our cabins were illegally built but these were our source of income. We do not have any formal employment and we earn our living through informal trading.

“Now that our source of income has been destroyed, we have nowhere to turn to for survival. It was better for council to regularise our cabins, or prepare some strategic sites, before destroying our tables,” she said, while shedding tears.

Mr Trymore Nelson, a vendor at Mapuranga in Highfield, also bemoaned the move by the city fathers saying they should have been considerate of the state of the country’s economy before carrying out the operation.

“A big percentage of the Zimbabwean population, particularly the urban dwellers survive on vending and informal trading. This is how we survive. Our industry is not fully functional and the only way to feed our families is through informal jobs. The council should have considered all that. They should also have created alternative places where we can do our business. Yes, they said there are places where we will be allowed to do business, but the places are not ready,” he said.

The Herald witnessed many residents helping themselves to roofing sheets, timber and other materials from the destroyed structures.