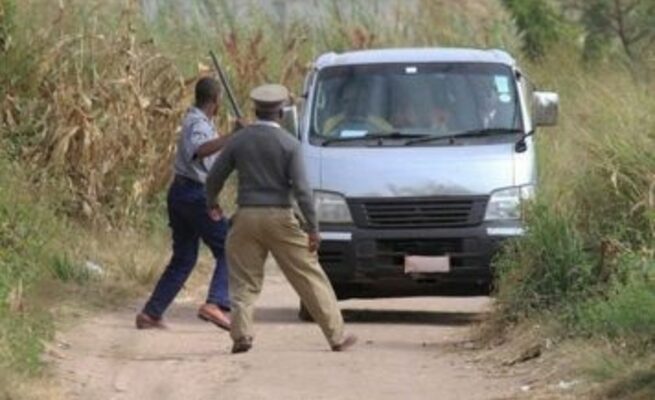 COMMUTER omnibuses and pirate taxis, which were barred from operating during lockdown are now playing hide and seek with the police in high density suburbs where they are unlawfully ferrying desperate vendors to and from fresh produce markets.

They are also offering transport to some other people who are sneaking into town in breach of the Covid-19 laws.

As early as 4am, kombis and Honda Fit pirate taxis will be plying different routes transporting vendors who are facing transport challenges.

Some desperate vendors are walking from as far as Kuwadzana to Lusaka market in Highfield daily to buy vegetables for resale.

Others walk from places like St Mary’s in Chitungwiza to Chikwanha market because of transport challenges.

Another category of vendors is hiring pushcarts to ferry vegetables to their homes.

Despite the ban on commuter omnibuses or other motorists who are not exempted, some motorists are taking advantage of the absence of the police on the roads in the early hours, to ferry passengers.

Most of the transporters illegally ferry vendors between 4am and 8am.

Some roadblocks and checkpoints in residential areas are dismounted in the evening with security forces resuming duties at around 8am.

Government recently ordered the opening of green markets from 6am and 10am daily where farmers sell their produce to urbanites.

However, no transport arrangements were made for the vendors and other people who go to the markets every morning to buy food.

The Herald visited Lusaka market in Highfield and Chikwanha market in Chitungwiza where pirate taxis and commuter omnibuses were dropping off vendors early morning.

“We are concerned with some pirate taxis which are ferrying people from one point to another. Some are transporting people from suburbs into city centres.

“We have observed that they evade checkpoints and sometimes they drop people before police checkpoints. We are going to impound their vehicles and the drivers or owners will be arrested.

“Since they are not offering any essential service this lockdown period, we urge them to stay at home,” Asst Comm Nyathi said.

At Chikwanha, Honda Fit pirate taxis, popularly known as “Mushikashika” were all over the market, with touts scrambling for the vendors.

An elderly woman from Zengeza One, who preferred anonymity, said she was contributing money with nine other vendors and hire a kombi daily to take them to and from the market.

“We contribute money as a group and pay the kombi driver who brings us here. We usually get here at around 5am before the police start patrolling.

“The kombi does not park here. After dropping us, the driver parks some distance away only to return when we are done with our shopping,” she said.

Another vendor said local Zupco commuter omnibuses plying the route only ferry employees classified as offering essential services who have to produce letters from employers.

At Lusaka Market, tinted Toyota Hiace vans were seen driving into the market to carry vegetables and later on picking up the vendors some 500 metres away.

When the Zimbabwe National Army (ZNA) and police officers arrived at the market to maintain law and order, illegal pirate taxi and kombi crews ran away leaving their vehicles unattended.

As soon as the security forces left the market, illegal transporters resurfaced and continued with operations.

A vendor who identified himself as Mr Sabastian Mushayatsango said: “I use my pushcart to ferry my goods to Cherima where I stay. Most of the vendors hire vehicles in groups and share the costs to enable them to ferry their vegetables home.

“We appeal for Government to allow us to operate and provide proper transportation to enable us to maintain social distancing.

“People will be squashed in the hired vehicles and no socioal distancing is observed,” he said.