Mwonzora and his MDC-T colleagues are contemplating the “daring” move to shock and awe other MPs to make them submit to the Thokozani Khupe-led opposition party.

“Mwonzora and crew planning to recall 6 MPs as a way to intimidate MDC Alliance MPs to join their camp after all MDC MPs have refused to support Mwonzora and Komichi.

“They have planned with their regime handlers that as soon as Parliament opens they recall Prosper Mutseyami (Chief Whip), Tabitha(Leader of the house), Noma Ndlovu (Deputy Chief whip), Senator Lilian Timvious, Chalton Hwende and Amos Chibaya. They are daring!

“Zanu PF and the system are aware that Mwonzora and crew have lost the battle to control MDC but want them to wreak havoc and weaken MDC Nelson Chamisa immensely ahead of 2023.

“If MDC rebels plot is executed as they desperately intend, it will expose big time how the system is involved and mired in attempts to destroy MDC Nelson Chamisa. 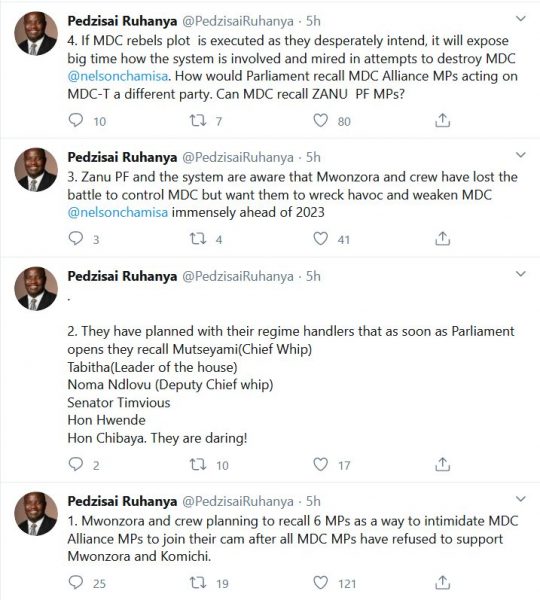 MDC-T is set to hold an extraordinary congress less than three months from now to elect a substantive president following the demise of Morgan Tsvangirai in 2018.

Thokozani Khupe was made interim president and ordered to organise the extraordinary congress by the Supreme Court.