A Mutasa man recently took his own life after allegedly failing to stomach step children’s disrespect.

The 35-year-old Chioniso Korowa Sithole, better known as Korowa, is said to have decided to end his life after his lover’s 15-year-old child had refused to go to the grinding mill. 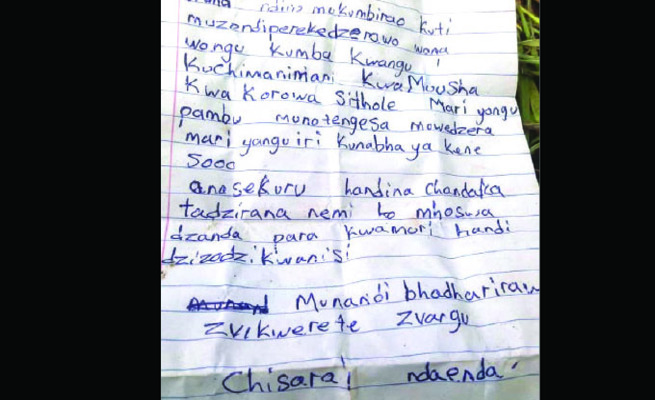 It is alleged that ever since the late gold panner moved in with his 55-year-old lover, only identified as Mai Glenda, he had known no peace as her three children where always disrespecting him.

According to Nyamukwarara Village 4 head, Lovemore Matunhira, this was causing countless misunderstandings between the two lovebirds.

However, Mai Glenda refused to talk to The Weekender, saying she is still mourning. But according to our sources, Korowa was not a happy man during his last few days. Said Matunhira: “They all refused to do house chores. Before going for his panning, Korowa would clean the house, wash the plates and cook for himself. He would then leave as soon as he was done. Upon his return, Korowa would cook for everyone and then retire for bed.

“On the last occasion, he asked Mai Glenda’s 15-year-old son to go to the grinding mill and the boy refused, stating that it was already getting dark. The boy also told Korowa that he was not his father and therefore had no right to order him to do anything.

“This angered Korowa. He grabbed an axe and ran after the child, threatening to kill him. The boy in turn threatened to commit suicide if Korowa did not leave their home.

“Following another heated argument on the conduct of Mai Glenda’s children, Korowa hanged himself the following morning,” said Matunhira.

Korowa left a suicide note which instructed that he be laid to rest at his rural home in Chimanimani.

He, however, did not state why he had taken his own life.

Korowa’s friend, Tongai Mandigore, told The Weekender that Korowa was always fuming over the children’s conduct.

“Mai Glenda never rebuked her children for the way they were treating my friend. To her, l think Korowa was just another lover who would leave someday while she moves on to another.

“I had known Korowa for the two years and he had never exhibited any suicide tendencies. He was a quiet person who enjoyed his beer,” said Mandigore.