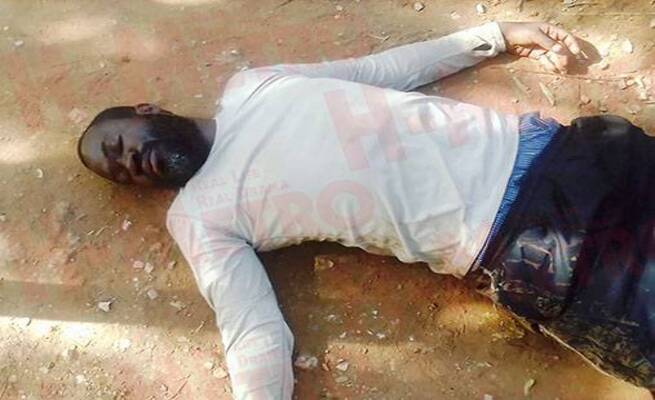 A lecturer with a university in Harare yesterday escaped death by a whisker after he attempted to commit suicide by drinking an unknown poisonous substance after mixing it with Two Keys whisky.

Dr Mbereko who is believed to be a lecturer at Women in Africa University yesterday allegedly tried to commit suicide at Chinhoyi Council Head offices and was found lying down haplessly.

H-METRO was at the scene of the incident where Dr Mbereko was lying down with a cellphone on his hand.

Some witnesses who saw Mbereko said that they had seen him with a bottle of Two Keys whisky and a plastic bag which had the unknown poisonous substance.

”He came from the direction of Edgar’s and he was mumbling to himself saying that nyaya dzevakadzi dzinonetsa,”

”A little while I heard a small noise and realized that he had fallen down and we rushed to the scene to see what had happened,” said the eye witness who preferred not to be identified.

Another eye witness said that the Doctor mentioned something to do with marital problems.

”He looked dejected and down to earth but and was talking to himself about having marital problems at home, ” he said.

He said that it was very saddening that such an educated man tried to take his own life.

”I was shocked when I heard that he was a doctor at a university,”

”I thought these people are the ones who are supposed to offer social- phycological support to us the weak. ,” Said an eye witness.

He added, ”He is a coward. Whatever problems he was facing in life, he could have consulted other people for advice than to end his life by taking poison,”

A senior citizen who alerted H-METRO about the attempted suicide said that the doctor was a shame to both colleagues at work and his family.

”He is a shame to both his family and work. How can he be such a coward to an extent of wanting to die in a public place like an animal,,” said the senior citizen.

A passerby who was coming from shopping said that he had seen the doctor in town with his whisky but never thought that he was contemplating to end his life by taking poison diluted in whisky.

”Pandamuona ndatoti inga havo vane mari kumukirira mangwanani kutenga doro nyambe he had an ulterior motive of his own. It’s a shame and very saddening indeed,” she said.

Dr Olga Laiza Kupika from the Chinhoyi University of Technology’s Wildlife Ecology and Conservation Department refused to comment about the issue.

Chinhoyi University of Technology’s Director of Marketing and Public Relations Dr Tapera Musekiwa said that his hands were tied up as the issue had nothing to do with the University as it was a private issue.

“It’s a little tricky for me to comment on domestic/family issues even if it involves a CUT staff member,” said Dr Musekiwa.