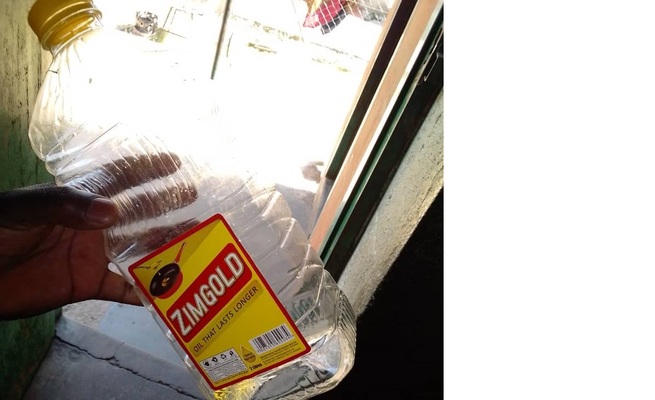 A MAN from Lupane has been arrested after he severely battered his wife on the butt0cks leading her to sustain swollen bums after he accused her of allegedly misusing cooking oil.

Thabani Nyoni, who is a carpenter and is from Lupaka area, reportedly fumed after his wife Hluphekile Nyoni told her that two litres of cooking oil which he bought a fortnight earlier was used up.

It is said Thabani who was intoxicated fumed at Hluphekile while accusing her of being spendthrift. Hluphekile whose name literally means the suffering one told the court that she had suffered at the hands of her abusive husband. She said her husband sternly ordered her to lie down and took a sjambok and thrashed her on the bums several times.

“I have been facing a nightmarish life at the hands of my husband. Whenever he is from a beer binge he would accuse me of petty things after that he would slap me in front of our kids saying I’m useless,” she said.

She added: “Last week I gave him relish without cooking oil. He did not eat. He just checked the plate before pushing it to me while accusing me of being spendthrift. Soon after that he grabbed me by my hand while insulting me and ordered me to lie down while threatening to kill me. I had to lie down and he took a sjambok and thrashed me on the butt0cks several times, I sustained lacerations on the butt0cks and they got swollen,” she said.

Hluphekile reported the matter to the police leading to the arrest of Thabani. He appeared before Lupane magistrate Ndumo Masuku facing an assault charge. He pleaded not guilty.

“Your worship I believe my wife misuses cooking oil and other basic commodities so as to fix me. That’s why I had to reprimand her. I believe it was my right to beat her because I want her to stop her ill tendencies of misusing things,” he said.

He was remanded out of custody to 6 June.