The claims have set twitter buzzing with critics slamming the underfire Zanu PF led government for acting outside the law.

Journalist and government critic Hopewell Chinono said, “by law, Mnangagwa should inform Parliament, it can reject & recall them or simply give a nod & a wink.” 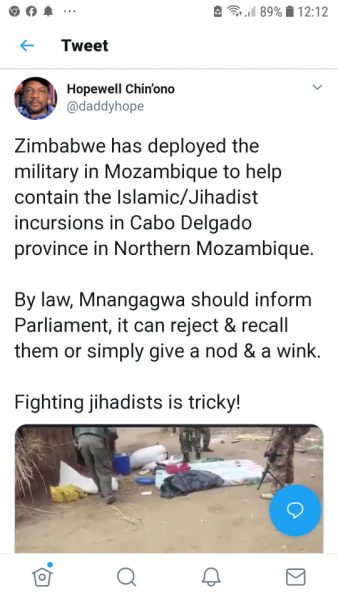 “Zimbabwe has not deployed the Zimbabwe Defence Forces(ZDF) in Mozambique.”

Meanwhile, MDC Vice president Tendai Biti has said its unlawful, costly and foolish to deploy the army to Northern Mozambique.

News Tanya Mugabe - 29 July 2021 0
PRESIDENTIAL spokesperson George Charamba says the media will not be informed when government deploys soldiers to strife-torn Mozambique. Government is set to deploy its contingent...
Loading...