The Deputy Minister of Information, Publicity and Broadcasting Services, Energy Mutodi has claimed that the masses are supporting the idea of abolishing or suspending by-elections in the country.

He said that the common view is that the replacement of the recalled Members of Parliament from the opposition MDC Alliance must be done by the party which recalled them. Posting on Twitter this Thursday, Mutodi said:

“Views from the masses indicate recalled MDCT MPs must be replaced by nominees from their party. By-elections will plunge the nation into election mood prematurely & derail government from focusing on economic recovery.” 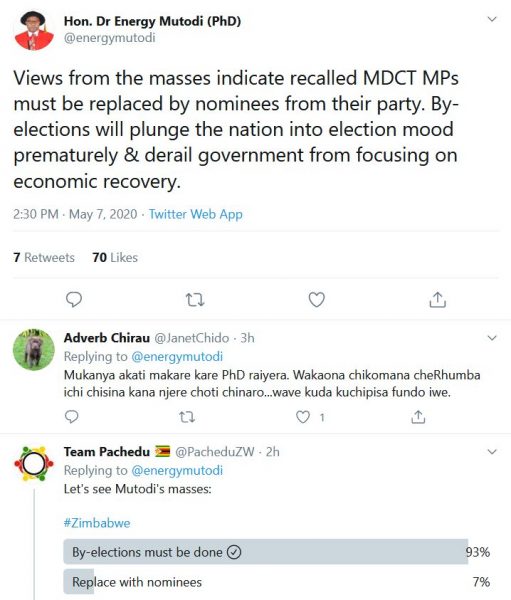 His remarks come after Jealousy Mawarire the former Spokesperson of the National People’s Party recently alleged that MDC-T’s reinstated power hungry Secretary-General Douglas Mwonzora was working with the ruling ZANU PF to ensure that by-elections are abolished in the country.

Analysts believe that this is a Zanu PF strategy to totally destroy Nelson Chamisa’s MDC Alliance.

News Sekai Moyo - 13 September 2021 0
A 17-year-old boy from Makakavhule area, under Chief Tshitaudze in Beitbridge has been arrested for fatally stabbing a fellow villager aged 23 years for...

News Muza Mpofu - 13 September 2021 0
A COP in Nigeria is in hot water after allegedly losing his firearm while was having d0ggie- style se_x with an ex-girlfriend on Friday,...

News Muza Mpofu - 13 September 2021 0
MDC Alliance leader Nelson Chamisa has suggested that his party was moving towards changing its name after a rival faction started angling to claim...

News Tanya Mugabe - 13 September 2021 0
Zanu PF has appointed the party’s Secretary for Indigenisation and Economic Empowerment Dr Mike Bimha as the acting Secretary for Information and Publicity with...

News Muza Mpofu - 13 September 2021 0
KZN police are investigating a case of culpable homicide after nine people died in a head-on collision on the N2 between Nseleni and Empangeni,...
Loading...