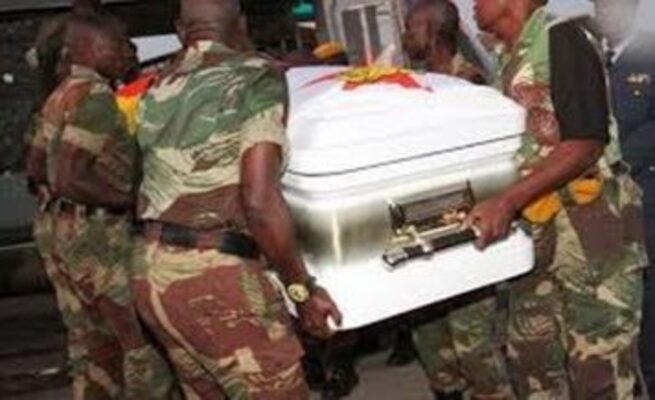 He was buried at Lady Stanley Cemetery in Bulawayo yesterday. He was 61.

“I am here as I have been sent to convey this message by the President. The late General Masuku has been declared a national hero and his works speak for themselves. He dedicated his life to service and until his death, he remained a committed serviceman. The Government has seen it fit to be confer National Hero Status on him,” said Dr Mpofu

“It is unfortunate that he is being declared a national hero after his burial. However, this does not take away the honour that has been bestowed upon him. The Covid-19 has made processes much more difficult as we are working remotely as we practise social distancing. Messages may take time to be heard and acted upon. However, we thank the family for doing such a splendid job in giving the late general a befitting send-off. His place at the National Heroes Acre shall be always known and he will not be forgotten for the works he has done.”

Brig-Gen Masuku whose Chimurenga name was Cde Kid Manzini was born on 16 July 1958 in Lupane, Matabeleland North and was attested into the Zimbabwe National Army (ZNA) on 1 January 1981. He is survived by wife Dr Nomathemba Ndiweni and three children Ngqabutho, Nqobile and Nomagugu Adelide.

Army officials, close relatives, friends and neighbours came to pay their last respects where he was given a befitting send-off at the cemetery. Mourners complied with the social distancing rules and numbers who attended the burial were kept at a minimum.

Representatives of the Joint Operations Command paid their last respects and laid wreaths at the graveside.

In an obituary read by the chief mourner, the Chief of Staff, Quarter Master Staff, Major-General Hlanganani Dube, who was representing the Commander of the ZNA, Lieutenant-General Edzai Chimonyo, Brig-Gen Masuku was described as a hardworking son of the soil who dedicated years into serving the nation.

“At a tender age of nineteen years, the late General officer together with other cadres joined the liberation struggle through Botswana before they were sent to Zambia in 1977. The late General officer was motivated by the oppressive regime that was in place which was characterised by discrimination and harassment of black people,” said Maj-Gen Dube.

“The late General officer managed to brave the Rhodesian security forces that were deployed to monitor the border and managed to cross to Botswana heading for Zambia to join the liberation struggle.

“During his stay in Zambia they also resisted various diseases and chemical warfare that was used by the enemy in an effort to annihilate the combatants that were fighting the regime. The late General officer was one of the survivors of that warfare.

“Whilst at Freedom Camp he and other cadres were subjected to gruesome Rhodesian air bombardment in August 1979 in which several of Zimbabwe People’s Revolutionary Army (Zipra) freedom fighters perished as the Rhodesians tried to derail the liberation struggle. After the bombardment the group was moved to Mulungushi Camp where they were again bombed two days after arrival. Thereafter, the group was moved back to Freedom Camp in October 1979 before proceeding for the Union of Soviet Socialist Republics (USSR).”

Brig-Gen Masuku did his primary education at Mzola Five and Tshongogwe primary schools in Lupane before proceeding to Ihlathi Secondary School in Bulawayo.

After ceasefire he joined the ZNA on January 1, 1981, as a lieutenant. He was appointed Officer Commanding 18 Infantry Battalion on June 24, 1981, before being appointed to Battery Commander 1 Air Defence Regiment on March 8, 1982.

He was posted to 402 Infantry Battalion as Officer Commanding on August 30, 1982 before being reassigned to Battalion Battle School, now All Arms Battle School, where he served as training officer from October 2, 1984, to August 1, 1987.

In May 1994, he was appointed Ordinance Staff Officer (Grade Two) (Material) while still at Ordinance Directorate. In 1995, the late General was promoted to the rank of Lieutenant Colonel.

On November 29, 2001, he was promoted to the rank of Colonel and assigned to Army Headquarters Quartermaster Staff Branch as a Staff Officer (Grade One) (Equipment Management). In 2003, while still at Army Headquarters, Brig-Gen Masuku was appointed Colonel Quartermaster Staff leading to his reassignment to the Zimbabwe Defence Forces Headquarters as Director Logistics where he served until 2013 when he was redeployed to South Africa as a Defence Attaché.

Brig-Gen Masuku was then deployed to the ZDI as the general manager, a position he held until his death.