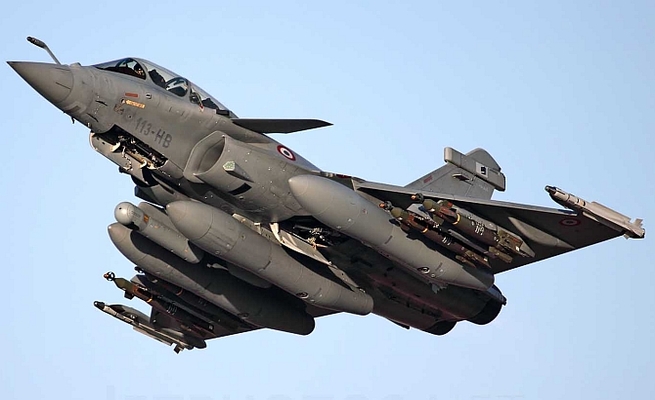 FOUR fighter aircrafts are set to arrive in India by the end of July boosting the country’s firepower in the air amid tensions with China and Pakistan.

The delivery of the first four Rafale fighter aircrafts was supposed to have arrived by the end of May from France but due to the outbreak of the coronavirus it was postponed by two months. The aircrafts reportedly cannot be matched by India’s rivals China and Pakistan.

“The trainers will have the tail numbers of the RB series in honour of the Air Force Chief RKS Bhadauria who played a pivotal role in finalising India’s largest-ever defence deal for 36 Rafale combat aircrafts.”

The Commanding Officer of the 17 Golden Arrows’ squadron is set to pilot the first aircraft alongside a French pilot.

According to reports, during the flight from France to India, it will stop at a French Air Force tanker aircraft to be refuelled before stopping in the Middle East.

A source said: “From Middle East to India, there would be one mid-air refuelling done by the Indian IL-78 tanker before they land in India.”

Seven Indian pilots have already completed their training at a French airbase while a second group will be travelling to France for training once the threat of the deadly coronavirus is relaxed in both countries.

Back in 2016, India signed a deal with France for 36 Rafales to meet the emergency requirements of the Indian Air Force.

The new fighter aircrafts are armed with a long-range Meteor air-to-air missile and SCALP.

It is reported that, with the air-to-air and air-to-ground strike capabilities, the Rafales cannot be matched by both China and Pakistan.

The contested border known as the Line of Actual Control (LAC) stretches more than 2,500 miles.

The LAC, which runs through territories including the disputed Kashmir region, has been a point of conflict between the two nations for decades and triggered a brief war in 1962.

According to the ANI: “The Chinese military helicopters were flying very close to the Line of Actual Control.

“After their movement was picked up, the Indian Air Force fighter jets flew patrols in the area.”

The military flyover is the latest sign of growing discontent between the two world superpowers after skirmishes broke out in the region over the weekend.

The boy has a secret phone: Latest on bootylicious woman who was caught having...

News Sekai Moyo - 5 March 2021 0
THE 26-year-old woman accused of bedding a minor after an Internet hook-up, yesterday had her High Court bail application rolled over to today. Precious Teya...

News Muza Mpofu - 4 March 2021 0
The Government has released the 2021 schools calendar signaling the return to the standard education interface after the prolonged Covid-19 furlough. The first term opens...
Loading...