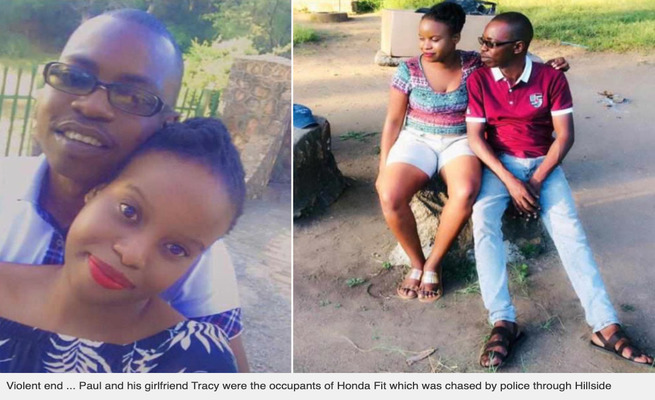 Police shot and killed a 34-year-old man following a high-speed chase in Bulawayo on Saturday night, his family said.

Police said the incident was under investigation. The family says the victim did nothing wrong.

National police spokesman Assistant Commissioner Paul Nyathi said: “A police patrol team made up of regular officers and community officers in the Hillside area came across a black Honda Fit parked on a road. The vehicle sped off and the officers gave chase.

“During the chase, the Honda Fit turned and hit the officers’ car and a shoot-out ensued. Unfortunately a man was injured and later passed on.

“What is of interest is that the parties (in Honda Fit) were found totally nak_ed in the car.”

Nyathi said the vehicle used by the officers had a beacon and markings indicating that it was a law enforcement vehicle, but this is disputed by the family.

The victim has been named by his family as Paul Munakopa. He died minutes after he was admitted at the United Bulawayo Hospitals with gunshot wounds. He had been shot at least twice, one of those shots rupturing his arm.

Munakopa was in the company of his girlfriend, Tracy Mufudzi, driving a black Honda Fit in Malindela suburb when a vehicle described as a white Toyota Prado blocked the road shortly after 9PM.

“Not knowing who the occupants of the other vehicle were, or their intentions, he reversed and got into Cecil Avenue. The other vehicle chased after them,” Munakopa’s brother-in-law Loveradge Tinotenda Mufudzi said.

The chase went into Caithness Road in Hillside where the Prado overtook the Fit and once again blocked the road.

Mufudzi, who arrived to a confused scene moments after the shooting following a call from his distressed sister, said two white men jumped out of the vehicle wearing caps and bandanas as masks.

“I heard from my sister that you couldn’t see their faces, only their eyes were visible. These two guys approached the Fit and started banging on the bonnet, and I understand at this time Paul again tried to reverse away,” Mufudzi said.

“Two uniformed police officers emerged from the car and started firing. Paul was shot on one of his hands and lost control of the vehicle which reversed into a ditch. The police officers then approached and used the butt of a gun to break the windscreen and pull him out.”

One of the two white men is reported to have called an ambulance which rushed Munakopa to the United Bulawayo Hospitals nearby. Doctors told his family he “would be fine, but one of his hands would have to be cut off,” according to Mufudzi.

But within 30 minutes of leaving the hospital, the family got a call to say he had not made it.

Mufudzi said at the scene of the shooting, the police officers would not identify themselves to the family.

The two white men were allowed to drive off from the scene, but they later found them at Hillside Police Station where they and the officers involved in the shooting gave statements.

“They actually put my sister in one room with those officers who did the shooting and the two white guys. The officer in charge at the police station arrived moments later to take statements,” Mufudzi said.

Videos taken by Mufudzi at the scene have voices of a man believed to be a police officer, ordering him to stop filming the police officers including a team which arrived in a white van.

Mufudzi, speaking on Sunday afternoon, said police were yet to explain the targeting of the vehicle.

“Our suspicion right now is that those two white men are members of the neighbourhood watch,” he said.

Assistant Commissioner Nyathi has said there are “several suspicions around the Honda Fit and we will reveal more facts soon.”

Mufudzi said the family was satisfied that no criminality was taking place at the time of the shooting.

“It’s news to me that they were nak_ed,” Mufudzi said, “but even if they were, is that a reason to kill them?”