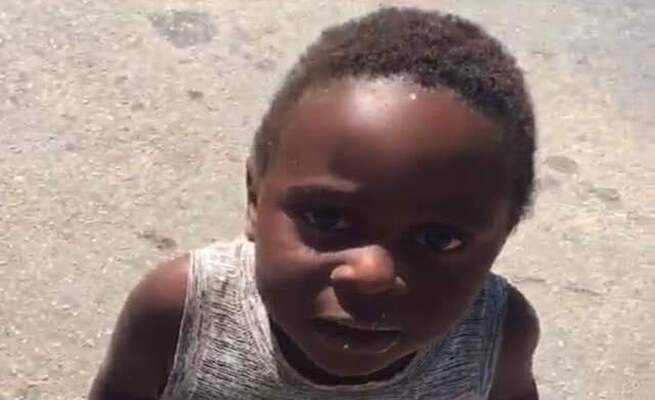 A THREE-YEAR-OLD Chinhoyi boy who starred in a video clip complaining about over reliance on sweet potatoes diet has had his wish granted by several corporates.

In the video, the boy wanted a change of diet as he complained to his father over eating too much sweet potatoes (mbambaira).

He urged his father to buy some bread for a change.

The video, which has since gone viral, has touched hearts of many people with companies like Bakers Inn, Proton, ZimGold, Dairibord Zimbabwe Private Limited, Roil Cooking Oil and individuals pledging to assist him.

They promised to pamper the boy with a lot of gifts and food hampers.

Zoolian Karendo stays in Chikonohono with his parents and the aunt, Marry Karendo who is close to the boy.

In the video, his father posed a question to his eccentric Zoolian?

He went on to pose another question asking him what he wanted.

And the boy responded saying:

In an EXCLUSIVE interview with H-Metro, Marry who shares the phone with the boy’s parents opened up on who this boy is.

“I am his aunt, sister to his father and we stay together at the same house with his parents.

“People think his statements are too big for his age, and some think ndisu tomuudzira zvekuita.

“The boy is always funny, and musikanzwa ndopamusha payo manje.

“He likes fighting, and pane basa hombe chairo,” she said.

Marry said his name might be behind his character.

The story to the boy stealing the limelight started when his father’s best friend recorded the video vachitotamba havo.

The voice behind the video is his father’s.

“His father was asking him whilst the friend was recording him before he later shared it and it then went viral.

“On the same day, he was eating sweet potatoes and the friend just thought of recording.

Marry said following the video, she has been receiving several calls from different companies and individuals promising to shower the young boy with different groceries.

“After the video, takazongoona macalls kubva nezuro like, I received a call from Proton Bakers promising to come to our place.

“We are yet to see them here, they haven’t come here but we hope they are on their way.

“People have been looking for us since the circulation of the video,” she said.

Below are some of the pledges offered by companies and individuals on their Twitter handles:

Bakers Inn – Sweet potatoes are only sweet for so long. Help us find this little gent, we have a sweet surprise for him. Retweet to spread the word! #BakersInnBread #SweetSurprise

We don’t know if you can fry sweet potatoes, but help us find this little man, we have a Cooling Oil hamper to make his breakfast a whole lot better, Kindly retweet so the little guy gets his hamper.