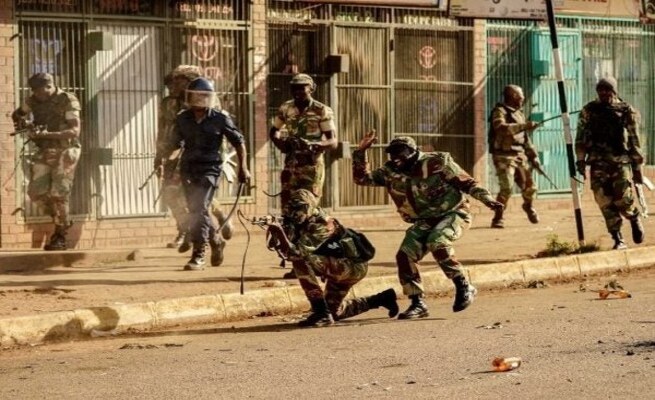 His call came as human rights defenders voiced concern over the gross violations of civil and political rights by security forces.

Rights groups said Zimbabwe was a liability to Africa as it lagged behind in the peace and development agenda as enshrined in the African Charter on Human and People’s Rights.

Speaking to NewsDay, Chamisa said Africa was tired of dictatorship and it was now time to end the crisis and build a united Africa.

“In Africa we must not have the bullet controlling the ballot. Politics must guide the gun. The gun must not dictate politics. The gun in politics is not just the gun in the barrack, it is also the gun of poverty, guns of drought, guns of terrorism and violence and the guns of tribalism.

There are also guns of election rigging that have affected Africa.”

Chamisa said there was need for partnership and no need for exploitation in a united Africa.

“We need a strong vision, not the divisions we have in Africa. We need to deal with the issue of entrepreneurship and have industries so that we don’t export raw materials,” he said.

“We must stop the merry go round business of changing riders without changing the ride. We have had Europe as a rider, now we have China as a rider. That cannot continue.”

Three MDC Alliance youth leaders, Joanah Mamombe, Member of Parliament for Harare West and two of her colleagues, Netsai Marova and Cecilia Chimbiri were recently abducted by suspected State security agents after a flash demonstration in Harare and were physically and se_xually abused.

Two journalists, Frank Chikowore and Samuel Takawira were arrested on Friday while trying to interview the three and were charged with allegedly disobeying an order from a police officer.

On his part, President Emmerson Mnangagwa in his Africa Day message, said the continent must continue to enjoy and consolidate democracy and good governance.

“We must continue to consolidate and deepen the culture of democracy and good governance bequeathed on us by our founding fathers. We can’t be taught democracy by those countries that unleashed colonialism against us. We are our own liberators,” he said.

In her Africa Day message, MDC-T leader Thokozani Khupe said political instability remains a key challenge in Africa that is already reeling from the crisis of unemployment, underdevelopment and economic instability.

“Bully villagers should realise that to murder, injure, persecute and jail your opponents is as outdated as Nazism and colonialism. Differences of opinion should never be a basis for the uprooting of another child from the village. Let us resolve disputes through dialogue with no bloodshed. Let us sit down and under the African moon, thrash the differences and affirm together,” Kasukuwere said.

Zimbabwe Human Rights NGO Forum in its Africa Day statement yesterday said many in Zimbabwe are yet to live the promise of the Constitution.

“As Zimbabwe and the continent commemorate Africa Day, Zimbabwe remains behind in Africa’s peace and development agenda, slowing down the advancement of its peoples and becoming a liability to Africa as a whole,” the NGO Forum said in a statement.

“In spite of the alignment of values and aspirations in the AU’s framework of principles and in the Constitution of Zimbabwe, many in Zimbabwe are yet to see, experience and live the promise of the Constitution.”

“It must be noted that the day, which is supposed to be a moment of celebrating our Africanness, and the values that bind us as a continent, is coming at a time when the country is in the middle of a storm of what appears to be State-sanctioned abductions of opposition party leaders and violence against women,” ZimRights said.

The African Union agenda 2063 envisions a continent where a universal culture of good governance, democratic values, gender equality, and respect for human rights, justice and the rule of law subsists.

Zimbabwe subscribes to the African Charter on Human and People’s Rights.

The Zimbabwe Lawyers for Human Rights (ZLHR) in a statement expressed concern “at the use of excessive force against unarmed civilians by security sectors players, the continued perpetration with impunity of gross violations of civil and political rights. Equally disturbing is the lack of prioritisation and provision of adequate resources to ensure the progressive realisation of social and economic rights”.

ZLHR said there was lack of political will by the government to fulfil the voluntary commitments made at the continental level.

Africa Day was commemorated under the theme Silencing the guns in Africa by 2020.

News Muza Mpofu - 2 August 2021 0
THE Zimbabwe Defence Forces (ZDF) is set to embark on four-day mass vaccination of Bulawayo residents as part of the military’s community outreach programme. The...
Loading...