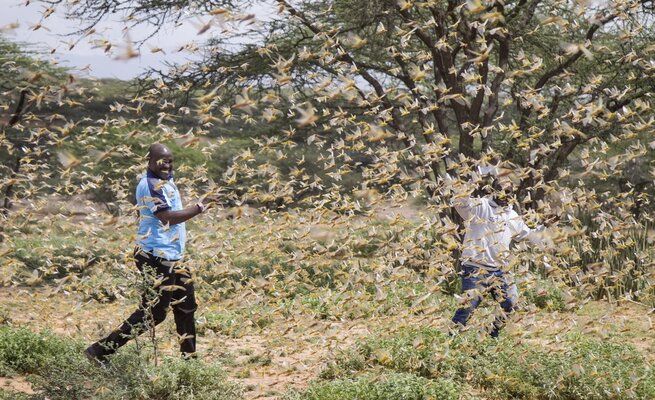 THE Horn of Africa region will experience another swarm of locust invasion in June through July, a senior locust expert at the Food and Agriculture Organization of the United Nations (FAO) said on Friday.

Keith Cressman, an FAO locust forecasting expert, said the next wave of invasion is likely to be larger than normal because of the favourable breeding conditions in the region.

“We expect that in the second half of June, another swarm of locusts will hit the Horn of Africa and then in July, migrate to Asia through Somalia,” Cressman told a webinar.

If climatic conditions are favourable for breeding, then the number of locusts will not only be larger but will stay longer, he said.

Kenya, Somalia, Ethiopia, Djibouti and Sudan are among the nine countries that are most affected by locusts, said Cressman, adding that their control is now becoming a huge challenge because of their numbers and the huge resources required.

According to the FAO, 24.6 billion shillings (about 232 million U.S. dollars) are needed for rapid response and anticipatory action in the Horn of Africa to December, but so far, only 130 million dollars have been raised since the locust invasion five months ago.

Cressman said while there is a concern relating to the type of chemicals being sprayed to kill locusts, and their after-effect, where there are not resources, farmers can dig trenches around their farms to trap locusts and then cover them with soil to die.

Richard-Mark Mbaram, who is the technical adviser of the minister for agriculture in Nigeria, said COVID-19 has disrupted the response to locusts as the world is focused on fighting the pandemic.

He said there is a need for concerted efforts by governments, donors and the private sector to provide additional resources to fight locusts to prevent another disaster in food shortage.

“African governments are struggling from a budgetary perspective. That is why we are also telling the private sector, especially companies involved in large scale farming and in the agriculture industry, to contribute to this fight,” Cressman said.

“The combined risk of desert locust on the planting season, the floods and the COVID-19 pandemic represent extremely alarming and unprecedented threats to food security, nutrition and livelihoods in the region,” said IGAD executive secretary Workneh Geneyehu.