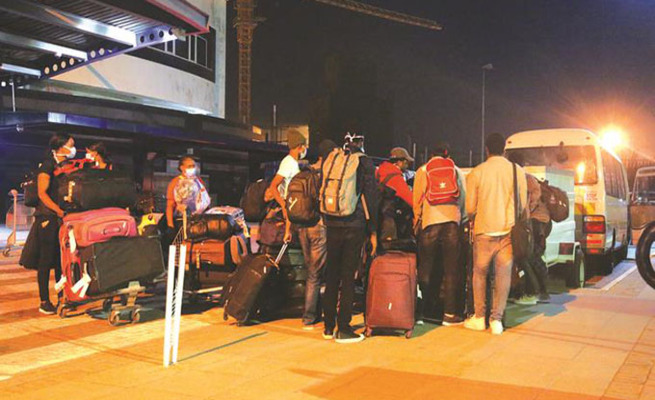 Three flights from the Philippines and Namibia brought 223 returning citizens and residents into Zimbabwe over the weekend, with all now in formal quarantine at two hotels serving as private quarantine centres.

The 182 who flew into Harare from Walvis Bay, Namibia, came on two flights, one with 100 passengers and the other with 82, having been transferred from a cruise ship that sailed from Florida in the United States where the returning group had assembled.

Forty-one from the Philippines returned on a chartered Air Zimbabwe B767-200 ER which also carried 139 South Africans taking advantage of a flight home and who were dropped off at OR Tambo Airport in Johannesburg on the way.

All three groups were ferried from Robert Gabriel Mugabe International Airport in buses after special clearance procedures on arrival so that they had minimal contact with anyone else. Authorities denied The Herald access to the returnees.

Private hotels and lodges were invited to apply for designation as quarantine centres and those who qualify are now being used to help residents who have adequate funds to pay the rates charged for a more comfortable eight days of initial quarantine than provided by the free Government service. The hotels have been given advice and have agreed to implement health rules.

A couple of families of returnees in the Philippines group were at the airport to hand over snacks and good wishes, under the rules, before their relatives were whisked away.

In Namibia, passengers on the cruise ship were kept aboard in the harbour by the health authorities while the two flights were arranged.

The group was then taken under police escort to Walvis Bay Airport to catch the flights home.

The dearth of international flights during the global pandemic forced the charter of the ship and the Philippines plane, and the special Namibian flights, so that the desperate Zimbabweans could come home safely.

“The returnees arrived on Saturday and are at the Rainbow (Towers) Hotel,” he said.

Returning citizens and residents have been coming regularly into Zimbabwe from South Africa, Botswana and Mozambique, with the Zimbabwean embassies helping identify bus companies for those able to pay the fares, and arranging with the foreign governments the necessary travel permits, and have been arranging buses for those who need Government help to come home.

Special Zupco buses pick up all these passengers from the three border posts and ferry them to their quarantine centres.

Giving details of the repatriation from Mozambique, Zimbabwean Ambassador Douglas Nyikayaramba said three batches totalling 140 Zimbabweans had already returned through Sango Border Post with a fourth bus-load expected in the next few days.

Most are cross border traders who were caught up in the national state of emergency declared on March 31 by Mozambican President Filipe Jacinto Nyusi and could not get home.

Ambassador Nyikayaramba said 140 Zimbabweans had already gone through Sango to Harare. “The first group of 46 departed on Saturday 16 May, the second group of 49 departed on 18 May, and the third group of 45 departed on 19 May. Currently the mission is making arrangements for the fourth group which should depart early June.

“The Government of Zimbabwe provided Zupco buses at Sango Border Post to ferry the nationals to Harare. They are currently quarantined at Roosevelt Girls High school,” he said.

All returning citizens and residents have to undergo quarantine and testing measures recommended by the World Health Organisation before they finally join their families, most after eight days and two negative tests, but a minority who are found to be infected when they have been treated and have recovered.

Zimbabwean citizens residing or working in various places across the world are returning following the outbreak of the Covid-19 pandemic and the subsequent lockdowns. While most are returning from South Africa, Botswana and the United Kingdom, there are others who have to make more complex journeys and travel arrangements across numerous national lockdowns to come home.

Upon their arrival, returning citizens and residents stay at a quarantine centre as near to their hometown as possible. They are tested on the first and eighth days. If the tests are both negative they are then allowed home where they must stay until the mandatory 21-day quarantine period is finished and they can be certified as non-infectious.

If a test shows that they are infected, then they move to an isolation hospital for treatment until they are better and no longer infectious.