ADVOCATE Thabani Mpofu, the Harare lawyer who represents MDC Alliance leader Nelson Chamisa in most of his cases, has been arrested on charges of defeating or obstructing the course of justice.

Mpofu handed himself over to police in the company of his lawyers after it emerged that he was wanted in connection with the crime said to have been committed in January 2019 at the Constitutional Court of Zimbabwe in Harare.

According to the sworn affidavit signed before police by Mpofu, he is accused of having acted in connivance with one Makanza and Choice Damiso to draft an affidavit to purport as if it had already been sworn before Damiso.

The State further says Mpofu proceeded to lodge the said affidavit with the Constitutional Court under case number CCZ 03/19, challenging the appointment of the Prosecutor-General. 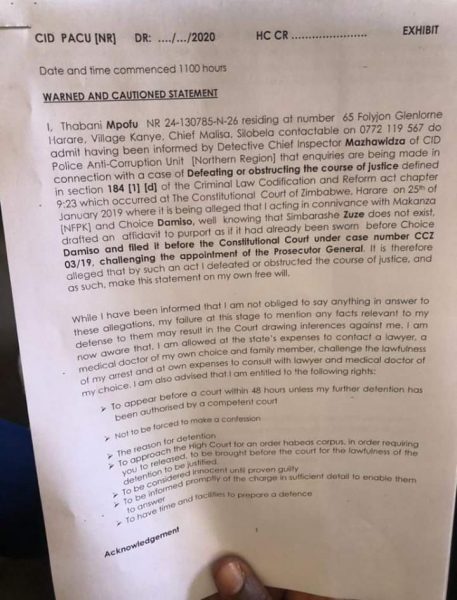 Meanwhile, the MDC Alliance, through its national spokesperson Fadzayi Mahere, says the charges against Mpofu are frivolous.

Mahere described Mpofu’s arrest as “the latest in a series of state-sponsored attacks against the pillars of our party and the democratic struggle in Zimbabwe.

News Tanya Mugabe - 29 July 2021 0
PRESIDENTIAL spokesperson George Charamba says the media will not be informed when government deploys soldiers to strife-torn Mozambique. Government is set to deploy its contingent...
Loading...