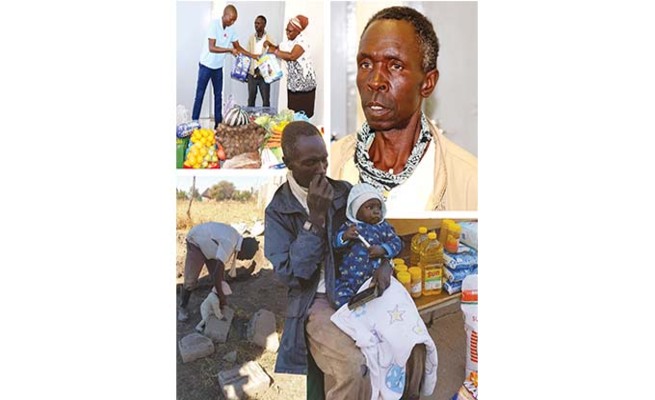 BABY Luvuyo, like hundreds of children in Zimbabwe, has been forced to live without a dose of a mother’s love following her death during delivery.

Born on July 28 last year, he had to be separated from his mother who bled to death at their Figtree home just after his delivery.

From his first day of life, this bundle of joy had to man up and brace the cold winter nights without his mother’s warm hugs and that will be the story of his life.

Luvuyo represents the scores of children whose mothers die during delivery which is estimated be at 462 per 100 000 live births in Zimbabwe according to the United Nations Population Fund.

He, however, is lucky to have a caring father who despite norm and patriarchal expectations took over his care and gladly fed, bathed and even changed soiled nappies all by himself.

The 10-month-old baby became an overnight sensation after his father, Mr Phumuza Gumede, was spotted pushing Luvuyo in a wheelbarrow while doing menial errands.

By yesterday evening, he had received about $47 000 on Ecocash from scores of caring members of the public with some buying groceries for the family.

Luvuyo also got a donor who will sponsor his education from primary school to university when his time comes, through Qoki Ndlovukazi Community Group, an organisation run by Zimbabwean women living abroad.

The organisation is also going to help Mr Gumede build a house for himself and his sons.

A builder by profession, Mr Gumede (63) has had to feed his son cow’s milk ever since his wife passed on. Luvuyo stayed at Plumtree District Hospital after his mother’s death for a month before social welfare officials formalised that he be put under his maternal aunt’s care in Cowdray Park suburb in Bulawayo.

His aunt allegedly dumped him in Figtree where Mr Gumede is renting a partially built house which left him with no option but to nurse and nurture his youngest of four sons.

Chronicle caught up with Mr Gumede yesterday who said at his age he never thought he would be forced to live with a 10-month-old baby all by himself.

“I have finally mastered the art of changing cotton nappies and I am proud to say I have nursed my baby by myself due to circumstances beyond my control. We had registered my wife’s pregnancy at Cyrene Clinic which is about 10km from our house but she never made it there,” says Mr Gumede.

“My wife died just after delivering and some elderly women who had come to help her deliver said she bled a lot.”

He said delays in registering and going to the clinic contributed to the death of his wife, who was popularly known as MaNkiwane.

“MaNkiwane left a huge scar in my life and after all the challenges that we had been through, I have vowed that I would take care of my four sons. The youngest, Luvuyo is somewhat special as he has made me experience fatherhood like never before,” explained Mr Gumede.

He expressed gratitude to his unknown donors who have not stopped supporting the family ever since his pictures went viral.

“I am still in awe, considering how many unknown people have been calling, sending money and groceries from all over Zimbabwe and beyond. I still cannot believe that it’s real and I can only ask God to bless them on my behalf,” he said.

“I am forever grateful even to those who called to confirm if the child had been taken away from me by social welfare officials. Everything is under control, we now have a lawyer representing us courtesy of Qoki Ndlovukazi and I know that soon my child will be back home,” he said, dismissing social media rumours.

Mr Gumede said he wishes to build a lovely home for his family and ensure they have a bright future using resources that have been trickling into his account.

The family’s lawyer, Mr Zibusiso Ncube from Ncube and Partners, said indeed the child was taken to the Councillor of the area Mr Felix Ncube on Tuesday to facilitate investigations.

“I have since visited the family and have also liaised with Inspector Sibanda from Figtree Police Station to get to the bottom of the matter. When pictures of Mr Gumede and his son started circulating, officials from social welfare reacted and decided to do an investigation as according to them, Luvuyo was under the care of her aunt in Cowdray Park officially,” said Mr Ncube.

“They have since established that his aunt dumped him and, together, we are working towards getting Gumede a residential stand for him and his other sons who are currently being cared for at a children’s home in Gwanda.”

According to Mr Ncube, social welfare had the right to put the child under foster, in this case Cllr Ncube, for seven days while conducting investigations.

“Next Tuesday, we will go to court and finalise the issue though we have already started working on ensuring Gumede has a decent home where he can stay with his children. We will ensure that whatever decision is taken stands to benefit this child,” he adds.

Ms Sibonakaliso Ncube, a neighbour to Mr Gumede, said it was painful to watch an elderly man nurse an infant after he had undergone stress following the death of his wife.

“We had never heard or seen such in our lives but Mr Gumede proved us all wrong and took good care of his baby. We are happy that he will now have a decent home and that a carer has been found to help him raise his four sons,” said Ms Ncube.

Qoki Ndlovukazi founder Ms Sithule Tshuma said it was the goal of the organisation to help distressed adults and vulnerable children.

“We have also sourced £500 for the family and we will be giving them monthly groceries. We picked up his story from social media and we decided to help him take care of his children,” said Ms Tshuma.
On top of education, grocery and house donations, Qoki Ndlovukazi is also going to pay the carer who has been found to nurse Luvuyo.