Matutu was suspended from his position in February after pointed criticism aimed at “cartels” in the fuel sector, which included attacks on Mnangagwa’s adviser and Zanu PF financier, Sakunda millionaire Kudakwashe Tagwirei, and Green Fuel founder Billy Rautenbach, who enjoys a near-monopoly in ethanol blending. 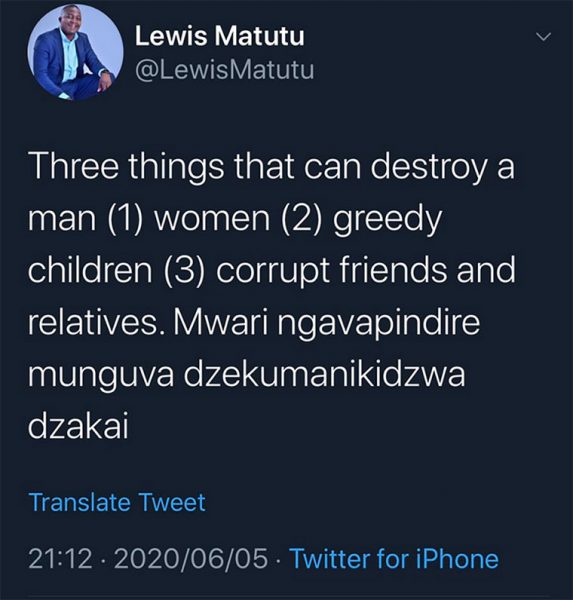 By Saturday, Matutu had taken down his account after scores of Twitter users linked his comments to a procurement scandal threatening to engulf Mnangagwa’s government.

The comment also appeared to reference Mnangagwa’s alleged infidelity. The 77-year-old reportedly has more than a dozen children born out of wedlock.

ZimLive has reported how two procurement contracts for Covid-19 materials were dolled out to two companies linked to Mnangagwa, even as both companies are not on the register of approved suppliers kept by the Procurement Regulatory Authority of Zimbabwe (PRAZ).

Jaji Investments, a company registered in Namibia, won contracts for over US$112,000 to supply coronavirus testing kits on the instructions of health minister, Obadiah Moyo. The company’s director, Garikai Prince Mushininga, has met Mnangagwa several times, and unimpeachable sources told ZimLive that Mnangagwa’s bodyguard and nephew, Valdano Brown, was the company’s representative in Zimbabwe.

Guvamatanga made a special exemption for Drax International, which says on its website it was registered in the United Arab Emirates in 2020. The company’s Zimbabwe representative, Delish Nguwaya, is a convicted criminal and business associate of Collins Mnangagwa, the president and first lady Auxillia Mnangagwa’s twin son.

Nguwaya, who has met Mnangagwa and his wife several times, denies business links with Collins. Mnangagwa’s son, meanwhile, has claimed to have no social relationship with Nguwaya – but pictures have emerged of them shopping for luxury cars in Dubai and attending official state events together.

Matutu had kept a low profile since his suspension by the Zanu PF politburo. Godfrey Tsenengamu – who was secretary for administration in the youth league – was also suspended and later expelled after he refused to attend “ideological training”.

Mnangagwa described the duo’s public denunciation of his allies as “misguided and misdirected activism which threatens the party’s unity, cohesion and singleness of purpose.”