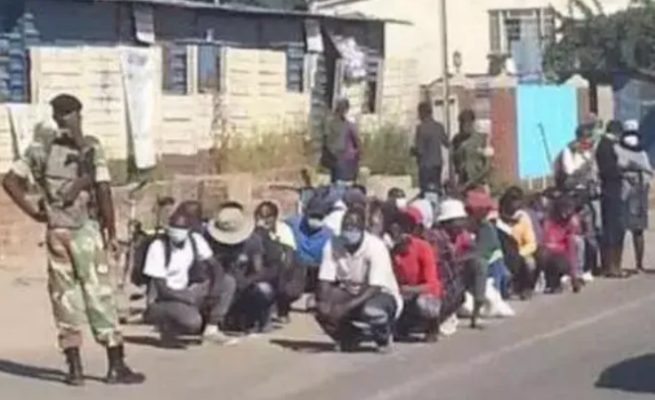 State security forces on Tuesday forced Bulawayo residents in the central business district to go back home amid reports of a planned protest by some citizens over the deteriorating economic situation in the country and alleged human rights abuses.

According to residents, armed soldiers and members of the Zimbabwe Republic Police detained several people and beat up those who questioned their motive in blocking them from accessing cash in banks and buying food supplies.

Police spokesperson Paul Nyathi was unreachable for comment. Some Zanu PF members claimed that the army and police were deployed to quell protests in the city.

“The security picked an intelligence report that there were planned spontaneous flash protests led by the Zimbabwe National Students’ Union and others. They then blocked the city in a bid to avert what happened in January 14/16 last year where over 100 shops in Bulawayo were destroyed.

“Please take note that some of the videos circulating saying there is violence and looting are lies being peddled by desperate people. The rumours about a coup are false as this happened only in Bulawayo and the president does not live in Bulawayo.”

Reverend Useni Sibanda of the Christian Alliance of Zimbabwe said, “The clampdown this morning and closure of central business district is another worrying example of how civil liberties are being trampled upon under the cover of COVID-19 measures.

“Poor desperate people who had come to collect cash from the banks were chased away. If government is now shutting down surely this should be communicated.”

Movement for Democratic Alliance activist, Edwin Ndlovu, said the situation is tense but calm in the city.

“Today in Bulawayo the army and the police were chasing people away from the city telling them that they were not earning enough to go to work therefore business was closed in Bulawayo.

“Those who asked why they were being chased away from the city were assaulted and some detained by the army at Matshobana, Mzilikazi and near Amakhosi.

“Last time when the army did this the next day our Harvest House offices in Harare were invaded at night and we suspect they might want to repeat this in Bulawayo.”