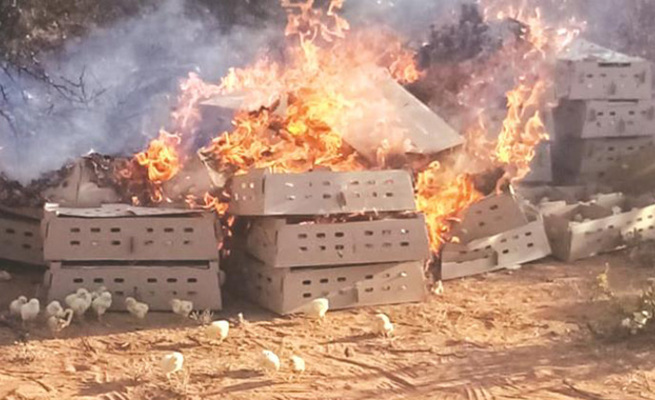 POLICE have intercepted two men smuggling a consignment of 19 600 day-old chicks across the Limpopo River from South Africa into Zimbabwe.

The pair was arrested on Tuesday evening near Panda Mine soon after entering the country.

The value of the chicks is yet to be established. Matabeleland South police spokesperson Chief Inspector Philisani Ndebele confirmed the incident yesterday saying: “Our team on patrol intercepted some suspects after smuggling chicks into the country.

“The matter has since been referred to the Zimbabwe Revenue Authority (Zimra) for further management. We understand that the chicks were destroyed by fire as per standard customs regulations.”

The two men, Admire Ndlovu of Mwenezi and Prince Gumbo of Dulivhadzimu suburb in Beitbridge, have since been charged with smuggling.

A source close to the case said Ndlovu was found with 8 820 chicks, while Gumbo was transporting 10 780 chicks.

“Following their arrest, they were taken to Zimra officials where the chicks were destroyed with guidance from veterinarians,” said the source. The smuggling of humans and goods along the Limpopo River has heightened following the closure of the only formal land border between Zimbabwe and South Africa at Beitbridge, as part of minimising the spread of Covid-19.

Groceries, baby diapers, electrical gadgets and cigarettes are some of the major items being smuggled across borders.

Government has also beefed up border security to minimise criminal activities. Since the start of the lockdown, the police have arrested over 30 people, recovering goods worth millions of rand from illegal crossing points.