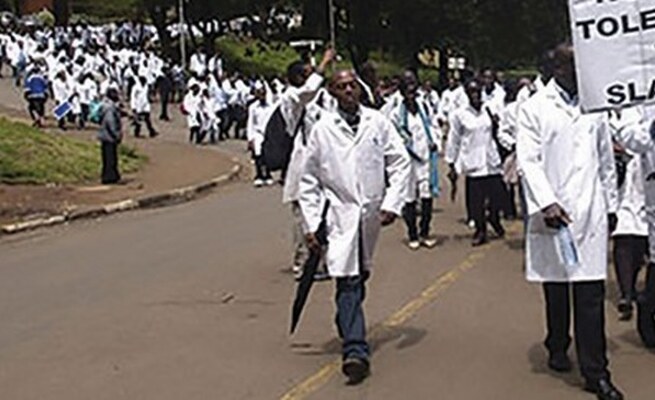 DOCTORS and nurses in public hospitals have gone on strike with immediate effect denouncing the US$75 Covid-19 allowance and 50% salary increment, which they described as inadequate.

The move will seriously hamper the Covid-19 fight as some of the health personnel on strike are deployed in hospitals designated as coronavirus treatment centres.

On Wednesday, the government announced a cushioning allowance of US$75 for every civil servant and a 50% salary increment with immediate effect.

However, doctors and nurses have rejected the offer demanding the government should pay salaries entirely in US dollars.

“Today (Thursday), we had a meeting which included Apex Council, doctors’ and nurses’ representatives,” he said.

“The position we reached as health workers is nurses, doctors at all levels, including junior, consultants and all who were represented in the meeting are withdrawing their services with immediate effect until our grievances have been addressed.”

He said the health workers have also rejected the Covid-19 allowance.

The placard-waving nurses denounced the US$75 allowance and 50% salary increment.

“Pay us our salaries in US dollars. Enough is Enough!” some of the placards read.

The Bulawayo demonstrations follow similar strikes that were staged in Harare Wednesday by nurses and health workers at Parirenyatwa hospital over the same demands.

Despite battling the Covid-19 pandemic, Bulawayo is grappling a diarrhoea outbreak which has killed five residents with hundreds left seeking treatment.

Meanwhile, the Zimbabwe Congress of Trade Unions (ZCTU) has dismissed the government’s US$75 Covid-19 allowances as kids’ snacks.

It added the offer was “too late, too little”.

Amalgamated Rural Teachers Union of Zimbabwe (ARTUZ) dismissed the offer and demanded the government to pay civil servants salaries pegged at 2017 figures when the Zimbabwe dollar was running 1:1 with the US$.

The militant ARTUZ has since threatened to embark on industrial action next week over poor salaries if its demands were not met. Schools, closed in March due to Covid-19, are yet to reopen.

“Our members have rejected this offer, we still demand our 2017 salaries of US$520. We are consulting other teacher unions for possible joint actions. The 22 June protest will go ahead as scheduled,” said ARTUZ.

The Progressive Teachers’ Union of Zimbabwe (PTUZ) said the US dollar allowance was only 20% of the teachers’ demands.

“The government has decided to meet our demands by a combined factor of about 20%. We still want our US$520. Fully dollarise and bring the economy back from the brink. We still can’t breathe,” PTUZ said.

ZCTU secretary-general Japhet Moyo described the government offer was a “bombshell” as the Tripartite Negotiating Forum (TNF) was not consulted.

“The government has just dropped a bombshell, announcing civil servants’ incomes with far-reaching implications, minus the involvement of the TNF,” he said.

“Just on 28 May 2020, there was an undertaking from the government that they would refrain from policy pronouncement without the involvement of the TNF.”