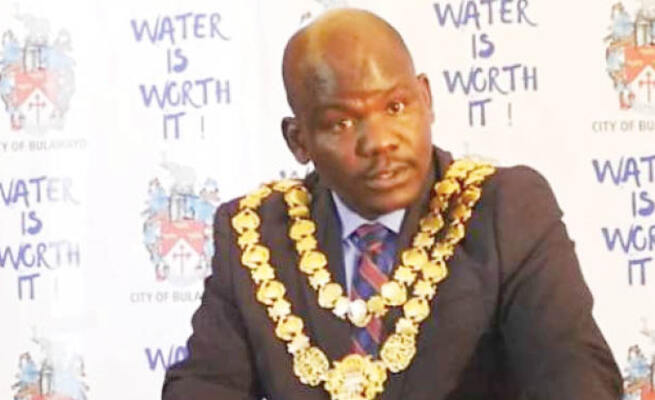 THE Bulawayo City Council has identified the disease which has killed nine people in Luveve as a gastrointestinal disease but warned that it was incapacitated to handle an outbreak of another disease at a time the country is battling coronavirus.

The Mayor, Councillor Solomon Mguni, revealed that health officials have identified the illness as a gastrointestinal disease outbreak.

He revealed that so far the outbreak has been clustered in Old Luveve, New Luveve and Gwabalanda.

“At least 726 suspected cases of Gastrointestinal Disease have been seen and evaluated at Luveve Clinic this week (last week) and at least 37 seen at their homes as at 18 June 2020. At least 15 were transferred to Mpilo Central Hospital from Luveve area (including the clinic) on 16 June with the hospital reporting at least 59 people being admitted and five having died (five children and one adult) as of 16 June 2020.

Investigations on community deaths is ongoing, with at least three having been reported. Symptoms being reported include watery diarrhoea, bloody diarrhoea, fever, vomiting and abdominal cramps and pain,” said Clr Mguni.

He said four treatment stations have been set up, with mobilisation of mobile ablution facilities in progress.

“The inter-departmental investigations (health and engineering services) are ongoing with water samples from taps, storage containers and unprotected wells being collected and sent to different laboratories for testing.

“The city continues with engagement of local leadership and community structures, council has also waivered water shedding in the affected area,” he said.

Clr Mguni said some of the patients who were admitted to Mpilo Central Hospital had been diagnosed with Haemolytic-uraemic syndrome, which is a group of blood disorders characterised by low red blood cells, acute kidney failure, and low platelets.

“Initially most of the Luveve cases complaining of diarrhoea were not reporting to the health facility citing that they did not have money to pay for service fees at the clinic. Patients were advised to seek care immediately while issue of payments was going to be addressed using the council’s pro-poor policy or unfunded mandate framework as has always been the case in outbreak situations.

“After that campaign, the numbers of patients seeking services has increased. It was also observed that the affected cases were not administering the home-made sugar and salt solution as they did not have sugar or salt at times. Oral Rehydration Solution (ORS) at clinics was distributed to those affected,” said Clr Mguni.

The Mayor said one of their major challenges to date in handling this gastrointestinal disease outbreak was the lack of personnel as already their officials were engrossed with containing the Covid-19 pandemic in the city.

“Council has inadequate human resources to cater for two outbreaks and maintain essential services, further there is a major worry in terms of the frequency of the diarrhoea deterring patients from seeking health services early. Water shortages are also deterring messages on hand washing as there was backlash experienced from the community. The danger is that the outbreak may not be limited to Luveve only,” said Clr Mguni.

The mayor dispelled social media reports that there was an outbreak of typhoid in the city. Meanwhile, the local authority has reported that it requires US$1 482 000 to address the problem of water contamination in the affected areas.

“The infrastructure is over 50 years old and has not had any water quality challenges. The 144- hour shedding strained the already aged network, further complicating the system and reducing its ability to self-cleanse due to prolonged hours of no water in the network.

“Part of Old Luveve water mains are being replaced under BWSSIP ( Bulawayo Water and Sewerage Services Improvement Project) which is an African Development Bank (AfDB) on-going project, to eliminate such challenges. The water connections are being separated and repositioned to run front-verge, whilst the sewer drainage will remain mid-block. However, funding has not been adequate to cover the whole of Old Luveve,” reads a council report on the contamination.

The targeted projects include; rehabilitation of the outfall sewer line with hand dug wells (US$1,2 million), repair of all water and sewer service connections (US$250 000), pipe laying and replacement (US$25 000), repair of the reclaimed line (US$5 000) and pipes and fittings (US$ 2 000).

In the immediate term the local authority revealed that it will be back-filling all unprotected hand dug wells and their use will be strongly discouraged. On Friday, the Government also ordered that all those treated for running tummies in the area must be tested for Covid-19.