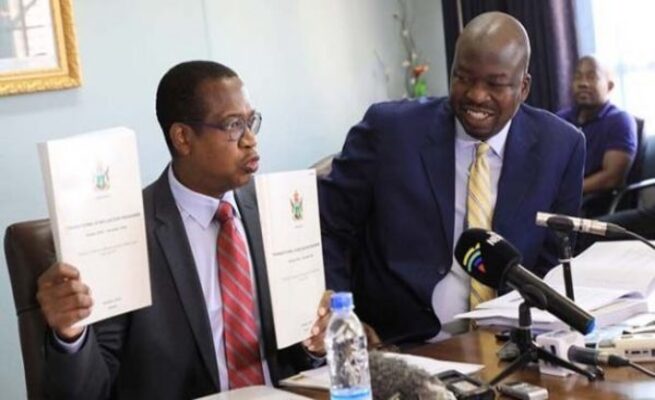 Zimbabwe is not sliding back into dollarisation after Government announced interim US dollar allowances for civil servants, but rather these allowances are a way of cushioning civil servants, Finance and Economic Development Minister Prof Mthuli Ncube has said.

He said Treasury was already working on an $18 billion package to revive all sectors of the economy.

Government last week awarded a 50 percent pay rise to civil servants and pensioners with immediate effect, together with a flat non-taxable US dollar denominated Covid-19 allowance for the next three months.

Speaking on the sidelines of a tour of the site designated for a Zimra dry port, about 10km out of Masvingo, along the Masvingo-Harare highway recently, Prof Ncube said no country can grow its economy without using a component of domestic currency as this would be the bedrock upon which the economy is drip-fed and grown.

“We cannot print the US dollar here in Zimbabwe and we need the domestic currency if we are to grow the economy. If you move around big supermarkets in big cities you will see 30 or so new products manufactured locally and this is the import substitution that we are pushing for because it will create jobs, while also growing our economy and saving foreign currency.”

He said the authorities, through the Financial Intelligence Unit under the RBZ, were working flat out to stabilise the local currency by plugging loopholes used by elements who abuse mobile money platforms.

Prof Ncube said civil servants and pensioners will not get the allowances in hard cash, but would be issued with cards to purchase goods and services locally using their US dollar allowances.

“We discourage the withdrawal of these funds in the form of cash because we are worried that this might fuel the parallel market. The money should circulate in the formal market,” he said.

He said concerns over the interbank rate will be addressed by the foreign currency auction system that will start tomorrow.

“Our people should be patient and not rush to make judgment. They must wait for tomorrow to see what the bank rate will be after the auction system for foreign currency. I don’t know what it will be in the future. It is a function of market forces, demand and supply, so let us wait and see.”

Minister Ncube last week also toured Beitbridge Border Post where he said more interventions will be rolled out to address challenges facing most civil servants and Zimbabweans in general.

“On the national Budget, we are very comfortable and we are able to meet the needs of the civil servants as planned.

“After all, they work very hard and inflation has been depressing their wages and salaries. We felt the need to increase their salaries by 50 percent on the Zimbabwean dollar component and introduce an US$75 non-taxable allowance for three months.

“The whole idea is to ease the Covid-19 pressures, while we manage and contain the novel coronavirus. Of course, this is the beginning. We have said that we will look at other non-monetary measures to support the civil servants. You will note that the foreign currency allowance is an inflation protector.”

He said there was nothing stopping the private sector from paying their workers in foreign currency though they will have to pay tax in the currency of trade as specified by the law.

The minister said $6,1 billion would be committed to the agriculture sector’s Presidential Inputs Scheme and the Command Agriculture.

“The mining sector, especially gold, is one of our major foreign currency earners and here we are committing $1 billion, while another $3 billion will be spent on reviving industries and small to medium enterprises, arts and sports.

“In addition, you will note that the tourism area has been hard hit and we are offering bank guarantees for those wishing to secure funding to revive their entities,” he said.

The minister added that the Government was considering reviewing the cash payments to vulnerable citizens. Government had registered 200 000 people and was encouraging more people to register with the Department of Social Welfare. These, he said, would include the returnees from various countries who did not have a source of livelihood to sustain their general upkeep.

“I have also taken note of the operational challenges at Beitbridge Border Post, which generates 31 percent of the Zimbabwe Revenue Authority’s annual income.

“There is a need to deploy more resources, among them helicopters, all-terrain vehicles and construction of staff accommodation to enhance efficiency issues and minimise intrusive leaks around the border with South Africa. These should cover, customs, immigration and security services,” said Professor Ncube.