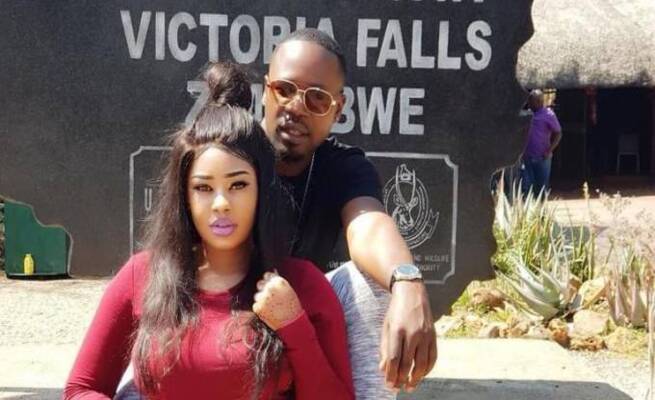 His 22-year-old wife, Dyonne Tanaka Tafirenyika took to her Instagram stories and posted two stories in which she tagged her husband whose handle is @Stunnerzim asking him why he had been rap_ing the 16-year-old and threatening to kill her (if she revealed the rap_e).

No criminal charges have been pursued against the rapper so far which has sparked debate over the internet.

She said Zimbabwe is a country with laws on how to deal with cases like rap_e so justice can never be met on social media.

“People are now abusing social media by posting every detail of their lives there, there are protocols on how to deal with issues like rap_e, and Zimbabwe is a country that has a Constitution which spells out how rap_ists, or suspected rap_ists are dealt with.

“If there is suspicion, reasonable suspicion that someone has been abused, lets follow the laws put in place, and as we go about trying to seek justice, let us be respectable about it, protect the victim. The alleged victim is a minor who will want to survive after this, Stunner wacho munhuwo who has dignity and is innocent until proven guilty so this matter needs to be dealt with cautiously.

“Social media haitonge nyaya, I don’t understand who told you young people that social media is the judge and jury, sometimes we do things out of anger but posting this issue on social media has very serious implications, the minor in question may not even cope well with how social media will blow the issue out of proportion. It’s her sister’s job to protect her and seek justice on her behalf, this can only be done by taking it to the responsible authorities so that justice can be met,” she said.

Enisia Mushusha, a theatre practitioner and women’s rights activist, added her two cents to the matter questioning why Tafirenyika took down the post, queering whether she had been intimidated, threatened or her account had been hacked.

“The internet has become a space to take ownership and shame attackers especially when the system fails them, the rap_e culture especially in our Zimbabwean community is still difficult to measure, characteristics like victim blaming, questioning victim credibility and showing empathy for the alleged perpetrator.

“In this case we don’t know what made Dyonne pull down the post? Was she lying? Is she being intimidated? In most cases, the victims are blamed by their family members kuti why you pulling our surname or our clan in the mud, at the same time rap_e victims are bullied and victimized and harassed both online and offline.

“However if that post was “one of those posts” that they do when they seek for attention then this is really a bad thing to do because rap_e is a serious offence but if it’s something that has been happening then Stunner is in serious trouble,” she said.

Most people commenting on the matter on social media were agreeing that rap_e is a serious accusation and if Tafirenyika is going to try and defend the post by saying she had been hacked, it was not going to be acceptable as the post was far reaching and there are screenshots with different time stamps to prove this.

One of the first to comment was Stunner’s ex-wife Olinda Chapel who said if the couple were trying to market their new music, it was in bad taste because young girls get rap_ed every day and it can’t be used as a joke.

Chapel added that if true, she hoped that these serious allegations will be seen through to court and the victim will get all the psychosocial help she requires, rap_e is very serious and shouldn’t be taken lightly AT ALL.

Some questioned why the matter hadn’t been reported to the police before it had spilt over to the internet.

Following rap_e allegations, a document purporting to be a medical report has found its way to the internet. 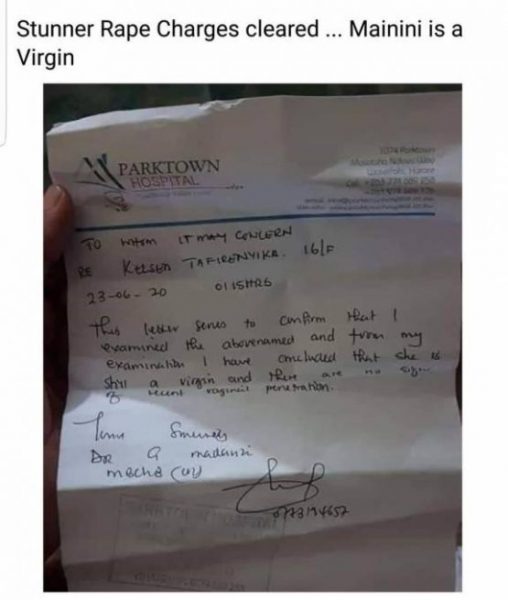 The document purporting to be from a private hospital started circulating on the internet claiming that the minor child had been taken to a private doctor to ascertain whether she had been rap_ed.

The document indicated that the minor had been examined at 0115 hours and was found to be a vir_gin and there ‘was no sign of recent vag_inal penetration.’

The document was, however, not the proper medical affidavit used in government hospitals when examining rap_e victims.

The document left a lot to be desired as there was no form of authentication to show whether it was done as required by the law when dealing with rap_e victims.

There was no comment on social media from the two, save to say that they deleted their pictures together.

This is not the first time that the couple has aired their dirty linen on Instagram and the last time Tafirenyika posted that Stunner was cheating on her.