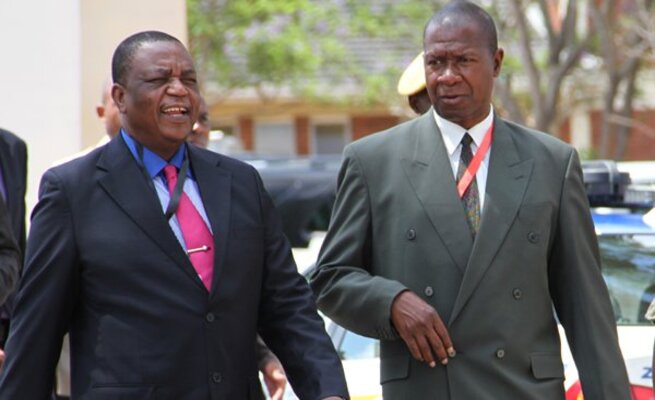 The progress of initiatives in agriculture to boost productivity and ensure import substitution have impressed the Government.

This came out at the recent launch of the John Deere mechanisation facility at the Institute of Agricultural Engineering in Hatcliffe.

The Ministry of Lands, Agriculture, Water and Rural Resettlement has come up with different initiatives aimed at empowering farmers and increasing productivity to boost the economy and livelihoods of people.

The programmes include summer and winter support inputs programmes and the Agricultural Recovery Plan.

Speaking at the mechanisation facility launch, Vice President Constantino Chiwenga said he was impressed by the initiatives being undertaken by the ministry to increase productivity.

“We have been moving around inspecting progress in all initiatives targeted at food and nutrition and I am satisfied with what I have seen,” he said.

“What is more important is that our farmers, bankers and developmental partners have embraced Government’s call to transform agriculture for the betterment of our economy.

“Together we can find solutions to our current challenges, especially in farm mechanisation which is a major limiting factor.

“I applaud Lands, Agriculture, Water and Rural Resettlement Minister Perrance Shiri and his secretary, Dr John Basera for coming up with the Agriculture Recovery Plan which is aimed at reversing the negative production trends, attain self-sufficiency and allow the country to move away from the perpetual importation of these strategic commodities.”

VP Chiwenga urged Treasury and the private sector to mobilise resources to support the Agriculture Recovery Plan, while Members of Parliament were called upon to rally behind such noble initiatives.

Vice President Kembo Mohadi also applauded the ministry for the initiatives to boost production and taking youths on board.

He said the recently launched mechanisation programme should be built around the whole agriculture value chain and private sector driven.

“Mechanisation should target youth to make agriculture attractive for employment and entrepreneurship.

“With mechanisation, victory on economic war is certain.

“To the Ministry of Lands, Agriculture, Water and Rural Resettlement I wish you success in the Agriculture Recovery Plan.”

The Ministry has come up with the Agriculture Recovery Plan aimed at reversing the current trends.

One of the concepts being spearheaded by Government to reverse the current trends in food production under the Agriculture Recovery Plan is the Pfumvudza concept.

The concept came as a result of a decline in food production due to climate change.

For the 2020/21 summer cropping season, the Presidential Inputs Scheme will cover 1,6 million households that will be required to have two plots of maize while those in the dry areas will have traditional grains that consist of oilseeds and pulses.

The inputs scheme will also cover sesame production, where the ministry is targeting 100 000 tonnes of the crop under the Presidential Inputs Scheme.

The growing of sesame is also being promoted to increase feedstock for cooking oil production and as an import substitution strategy.

The Ministry of Lands, Agriculture, Water and Rural Resettlement is also set to roll out a policy of mandatory application of agricultural lime to correct the soil pH since many Zimbabwean soils are acidic.

The soils conditioning programme will involve the countrywide promotion and use of lime to sweeten acidic soils starting from June to July, especially for the Government and private sponsored input schemes including the Presidential Inputs Scheme and the commercial contract farming programme led by financial services firms and targeting 5 000 highly productive farmers in irrigated areas.

News Cynthia Goba - 28 July 2021 0
THE family of slain Tapiwa Makore says they continue to be traumatised by the fact that the courts were taking long to conclude the...
Loading...