The expulsions come when the MDC-T leadership has in the recent past been recalling Senators and legislators who paid allegiance to MDC Alliance leader Nelson Chamisa.

The development was announced in a letter addressed to the Harare Town Clerk, Engineer H Chisango and copied to the Minister of Justice, Legal and Parliamentary Affairs, Minister of State for Provincial Affairs and Devolution, Harare Metropolitan, OPC Chief Secretary and others.

The letter read in part:

I wish to inform you that I am in receipt of a letter from the movement for Democratic Change stating that Cllr D, Ngadziore Ward 16. Cllr Grisot Mandere Ward 44, Cllr Jolson Kautsa ward 37 and Cllr Tonderai Chakeredza Ward 31 have been expelled from that Party.

In terms of Section 121 of the Electoral Act, please inform the Zimbabwe Electoral Commission of the vacancies. 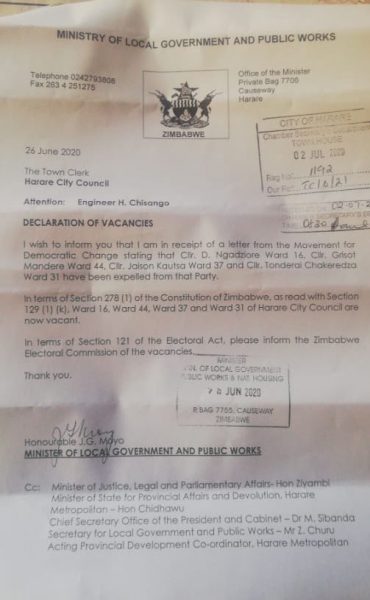 News Muza Mpofu - 16 June 2021 0
A BEITBRIDGE woman lost US$10  000 to two armed robbers who masqueraded as buyers of a vehicle she was selling after she offered them...

News Muza Mpofu - 16 June 2021 0
A ZIMBABWEAN student at the University of Namibia who lied to police that his laptop and mobile phone had been stolen in Victoria Falls...
Loading...