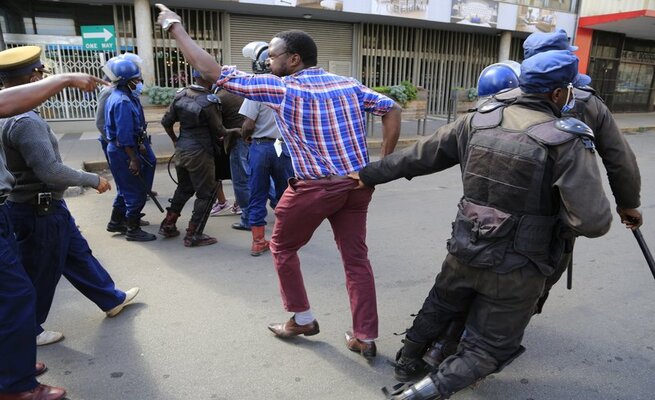 The MDC ALLIANCE took issue with the security forces for failing to intervene when the MDC-T took over Harvest House and instead deliberately tried to sully the image of the uniformed forces by making false claims they were actively involved in the process, the US Embassy in Harare has been told.

In a letter to the embassy, MDC-T acting president Dr Thokozani Khupe said MDC-T security officials took over the building in central Harare on June 4 without incident pursuant to the March 31 Supreme Court ruling which nullified Mr Chamisa’s leadership of the party.

The ruling also placed Dr Khupe at the helm of the MDC-T pending an extraordinary congress to elect a new leader.

A number of Western embassies led by the United States Embassy released statements accusing the army and the police of storming the building in order to clear the way for the takeover.

“We are dismayed by the politicised use of security forces to take over the headquarters of an opposition party and arrest its members. A healthy democracy requires healthy opposition parties. #PoliticalArrests #AHouseStolen,” tweeted the US Embassy without verifying the claims.

Dr Khupe’s office, however, has since given a detailed account of how the handover-takeover process unfolded.

“Our team of the security officers who took over Morgan Richard Tsvangirayi House (MRT — formerly Harvest House) were only three in number,” reads the letter dated July 1, 2020. There was no army or police at the time that they entered.

“For the avoidance of doubt, the army and the police did not take part in the handover of the headquarters as alleged.”

Following the takeover MDC Alliance secretary-general Charlton Hwende led an abortive attempt to violently storm the building backed by a group of party youths. Dr Khupe said hours after her party announced the takeover, a group of 45 youths led by Mr Hwende came to the building before attempting to forcibly gain entry.

Police details who were patrolling nearby, said Dr Khupe, immediately called for reinforcements before arresting five youths who were part of Mr Hwende’s gang.

“Later, Charlton Hwende went to the front side of the building where a few police had gathered,” the letter further states.

“He asked them to help him and his crowd to gain entry into the building and they refused to do that.

“The army personnel who were parked further up the street refused to have anything to do with Hwende and his group.”

“Faced with a possibility of violence that would erupt as a result and in a bid to prevent any injury or possible death from occurring, we rushed to the Magistrates Court and obtained an interdict against these people,” she said.

“The interdict ordered the officials of the MDC Alliance to stop trying to take possession of MRT House without a valid court order.

“It also specifically directed the police to maintain law and order at and around MRT House. The police were ordered to ensure that the Magistrates Court order was enforced.

“Apparently, based on the misinformation, the US Embassy issued a statement to the effect that our legal repossession of our premises included the involvement of the military and police.”

On two occasions, she said, the MDC Alliance through its legal counsel and officials had publicly admitted that neither the police nor the army were involved in the takeover.

In an application filed before the High Court on June 6 by MDC-T chief of security Mr Washington Gaga against the Commissioner-General of Police, the MDC Alliance absolved the police and army of participating in the takeover.

“In Paragraphs 10, 11 and 12 (of the application) he categorically states that the building was taken over by Paul Gorekore, Friday Muleya and Tendai Muchekahanzu on the 4th of June 2020 and not by the army and the police,” reads Dr Khupe’s letter.

She adds that another letter to Harare provincial police from MDC-A lawyers, Atherstone and Cook, further absolves the security forces from any involvement.

“They wrote a letter to the Dispol (ZRP District) Harare where they made a complaint that the police and the army had refused to intervene when the building was being taken.

“They stated that it was Charlton Hwende who tried to get the assistance of the police.

“While the MDC Alliance wanted violence and lawlessness, we made use of legal channels to avert bloodshed and anarchy.”

The MDC-T, said Dr Khupe, would welcome an independent inquiry into the circumstances.

“It is unfortunate that the US embassy issued statements before verifying the facts,” she concluded.