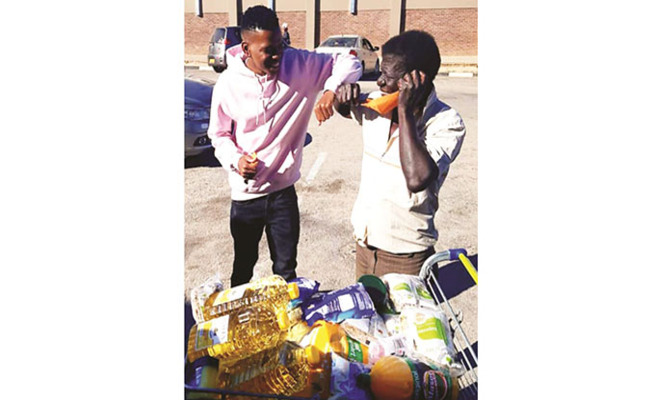 YESTERYEAR musician Patrick Mkwamba, who recently got a surprise gift of food hamper worth ZW$10 000 and US$100 cash donations from rapper King 98, sold part of the groceries.

The Rusape based crooner, who survives from selling his music CDs to travellers and fans, confirmed he had no choice but to sell part of the stuff since it was provided in bulk.

In an interview with H-Metro, the 73-year-old said he does not regret his move since the groceries belonged to him.

“I had no choice but to sell part of the groceries that I got from King 98’s handlers since I received the stuff in bulk.

“When King 98‘s people came to Rusape, they did not give me a chance to compile a list of what I wanted and it appears they were concerned about reaching the Z$10 000 figure.

“As a result, we ended up buying stuff in bulk and some of the things I realised I would not use anytime soon.

“I was also afraid that some of the stuff would rot. For instance, they bought a lot of meat for me but I do not have a fridge at home.

“The guys also bought me some fresh and powdered milk that I feared would either rot or expire because the stuff came in bulky.

Asked what he did with the US$100 cash he received from King 98, Mkwamba said he was yet to use it.

“In this era we are in, US$100 is a lot of money for me and I want to use it wisely so that I can change my life,” said Mkwamba while producing the crisp US$100 note he got from King 98.

Despite selling part of King 98’s groceries, Mkwamba said he was grateful to the Dondo family after they showed him some love.

“I will be forever grateful to this family as they remembered me during such trying time and I am now rich with groceries and money.

“It’s not easy to be remembered during such trying times and I will always remember them for the good work they are doing,” he added.

Contacted for comment, King 98’s manager and most trusted lieutenant DJ Simmz said it was not their responsibility to monitor how Mkwamba used the groceries.

“On behalf of King 98, I can safely say we did our part by donating to Mkwamba and what he did with the stuff is up to him.

“We only learnt about his plight and offered to help him and we delivered the stuff,” he said.

Prior to Mkwamba getting donations, he was reportedly wallowing in poverty after losing his source of income.

The The Jonasi (Wapenga Nayo Bonus) hit-maker was then assisted by King 98 after they were alerted of the Mkwamba’s plight by fellow musician Sam Mataure.

Mataure is one of the artistes who received food hampers from King 98 along with Progress Chipfumo and Gift “Shig-Shiga” Katulika as part of the rapper’s charity work.