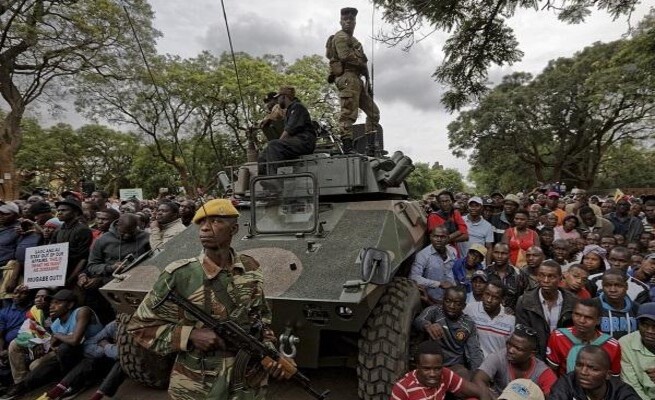 OPPOSITION Transform Zimbabwe president and organiser of the July 31 national protest against corruption, Jacob Ngarivhume has urged the country’s military to stand with the masses as opposed to politicians who have plundered national resources.

His call comes amid growing fears that State security forces will derail the protest through arrests and beatings of the peaceful marchers.

However, Ngarivhume who is on a national tour mobilising Zimbabweans to protest against rising State corruption, pleaded in an interview on NewZimbabwe’s flagship television programme, The Agenda, Monday, for the military to stand on the side of the people 31 July and not protect the looters.

“So we don’t want a notion to associate the military authority of this country with Zanu PF. The Zimbabwe Defence Forces are for everybody. That is our understanding. The idea is that the people of Zimbabwe will not be demonstrating against the military on this day.

“There has not been a provocation of the military. The people of Zimbabwe have raised issues they are speaking out against. It will be up to the military of Zimbabwe to be on the side of the people.”

Ministry of Information secretary, Nick Mangwana, had earlier Monday warned Ngarivhume that organising a demonstration against the government of the day was tantamount to subversion.

“If there was no Covid-19 catastrophe nobody would have a problem with an anti-corruption march. But to try to overthrow a constitutional order and replace it with an unelected monster is not democracy. It’s lawlessness. Democracy does not work that way,” said Mangwana.

However, Ngarivhume said he was not afraid of arrest as he believes he was on the right side of history.

“We are not afraid to end up in jail. The question is, why would one say when people demand an end to corruption, when people demand looters to go, then Nick Mangwana would feel it’s a demand to overthrow a constitutional government? Why would he think like that?”

On 1 August 2018, the army used live ammunition to quell disturbances as people demonstrated in central Harare over the delay in announcing the July 30, 2018, presidential election results. Several people died and scores were injured.

In January last year, over a dozen died after State security agents also used live ammunition of demonstrators marching against a hike in fuel prices.

News Nelson Bhebhe - 16 June 2021 0
A bus terminus tout was killed, allegedly by a bus crew, early Wednesday in Harare. The body of the unnamed man was still at the...
Loading...