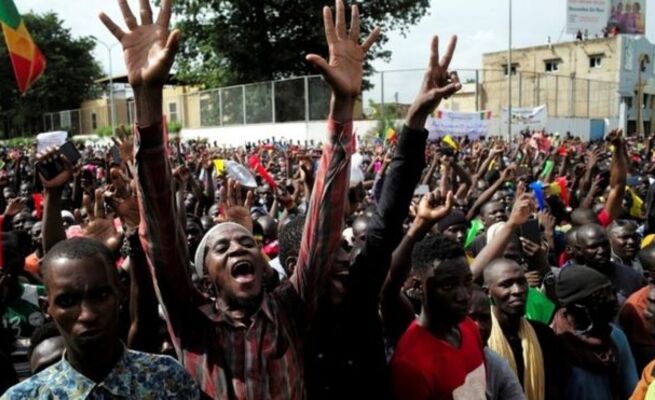 In a rare joint visit, the presidents of Senegal, Ivory Coast, Ghana, Nigeria and Niger will meet Malian President Ibrahim Boubacar Keita and members of the opposition June 5 Movement in the capital Bamako, according to an official programme.

The trip comes as the unrest has pushed Mali to the brink, with international allies and neighbours keen to avoid the conflict-torn West African country sliding into chaos.

Keita has been locked for weeks in a standoff with the June 5 Movement that spiralled into violent clashes earlier this month, leaving 11 dead.

The movement – which insists that Keita resign – has tapped into public anger over the leader’s perceived failure to tackle the dire economy, corruption and an eight-year jihadist conflict.

Malians are also incensed at the disputed outcome of long-delayed parliamentary elections in March and April that handed victory to Keita’s party.

The African presidents on Thursday follow on the heels of an earlier five-day mediation mission from the 15-nation Economic Community of West African States (ECOWAS), which ended on Sunday without reconciling the two sides.

“It is this Thursday that the last act is played, the curtain will fall,” said a Malian opposition politician who declined to be named.

The group of presidents is expected to weigh in on – and potentially sign off on – solutions to the impasse floated in behind-the-scenes talks between the president and opposition figures this week.

Keita, who came to power in 2013, has come under increasing pressure to end Mali’s long-running jihadist conflict.

The poor nation of some 20 million people has been struggling to contain an insurgency that first emerged in the north in 2012 before spreading to its centre, as well as neighbouring Burkina Faso and Niger.

Thousands of soldiers and civilians have died in the conflict, and hundreds of thousands of people have been driven from their homes.

But much of the current tension was sparked in April, when the constitutional court tossed out 31 results from the parliamentary elections, benefitting Keita’s party and sparking protests.

Tensions then evolved into crisis on 10 July, when an anti-Keita rally organised by the June 5 Movement turned violent.

Protesters blocked bridges in Bamako, stormed the premises of the state broadcaster and attacked the parliament.

Three days of clashes between protesters and security forces followed, leaving 11 dead and 158 injured in the worst political unrest Mali had seen in years.

As a way out of the impasse, ECOWAS mediators suggested forming a new unity government including opposition members, as well as appointing new constitutional court judges who could potentially re-examine disputed election results.

But the June 5 Movement had already rejected any outcome that did not involve Keita’s departure – a demand opposition leaders have repeated for weeks.

Despite the apparent failure of the ECOWAS mediators, the president’s camp and opposition figures have quietly been talking all week.

Ibrahim Maiga, a researcher at the Institute for Security Studies think-tank in Bamako, said mediation was a “continuous and dynamic process” and that earlier efforts had not necessarily failed.

In an apparent sign of goodwill, for example, the June 5 Movement declared a “truce” on Monday, vowing not to call protests ahead of the forthcoming Eid festival.

Brema Ely Dicko, a sociologist at the University of Bamako, suggested that the opposition may be prepared to accept Prime Minister Boubou Cisse’s resignation instead of Keita’s.

“The M5-RFP is obliged to keep up the pressure to at least get something,” he said, using the opposition coalition’s formal acronym.

A European diplomat in Bamako who declined to be named said that the opposition might have been “too greedy” in insisting on Keita’s departure.

“Nobody wants to open the door to a period of political instability in Mali, which remains the epicentre of the Sahel security crisis,” he added.