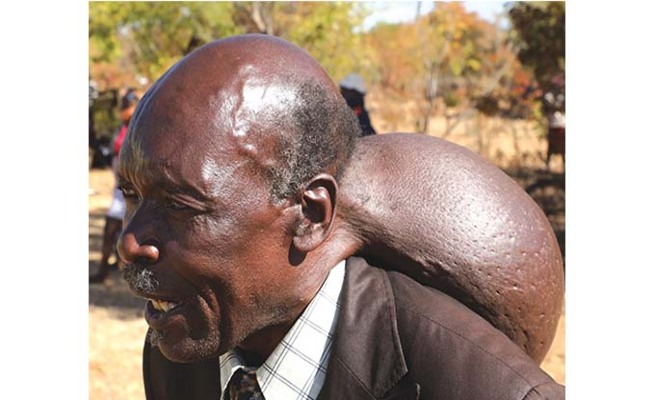 A man with a 10kg lump at the back of his neck, who was seeking an operation to remove it has said he is afraid to go under the knife while the Covid-19 pandemic ravages the world.

Mr Kenneth Dube says he wants to wait until the virus subsides in the country.

Dube has been living with this giant lipoma the majority of his 73-year-old life. A lipoma, is a fatty lump most often situated between the skin and underlying muscle layer. They commonly occur in the neck, shoulders, back, abdomen, arms and thighs.

The lump has got him ridicule in his home area of Insuza in Matabeleland North, Zimbabwe. Villagers who have lived with him for years have given him a nickname uBhundu (in reference to the giant lipoma).

Four years ago, at St Luke’s Hospital, doctors said the lipoma weighed around 8,4kg and Mr Dube estimates it could be around 10kg now.

Following the publication of his plight in the Chronicle last month, Mr Dube said a doctor last month looked at him at St Luke’s Hospital to assess if they could help him.

“I was called by the doctor at St Luke’s who said that I can be helped. I returned to my home to think about it and that is how I came up with the decision. People want to help me but I think it’s best to do it after lockdown is reduced,” he said.

Mr Dube has not had a decent night sleep in years as he has to grapple with positioning the lump all night long.

When Mr Dube turns his back the enormous lump glaringly hangs out for all and sundry to see. Sneers of disgust greet him when people see him. Villagers who have lived with him for years have given him a nickname uBhundu (in reference to the giant lipoma).

When he speaks about the nickname, his voice quivers in hurt as he relates that it makes him feel like an outcast.

Although he appreciates help from people, Mr Dube said he was not at ease with having the lump removed during the pandemic.

“My heart isn’t at ease. During this time of Covid-19, anything can happen. I want my family to come and freely see me in the hospital and also after I get operated on to remove this, when I’m not in fear,” said Mr Dube.

He said perhaps when the scourge subsides, he would consider going under the knife.

“When this Covid-19 scourge subsides because by the look of things, the infections are increasing. When lockdown measures are eased, I think I can go to the hospital. This is the only time I think I can go under the knife. I think I have put this on hold and not act out of desperation,” said Mr Dube.

The lipoma started as a small pimple some 52 years ago after he fought with another villager in Lupane where he was born. Fighting over what, Mr Dube does not even remember, but a reminder of that fateful day is the giant lipoma at the back of his head that has been growing steadily over the years.

He has worked for Fawcett Security Company as a dog handler and Condemn Construction company as a guard when the organisation, Mr Dube said, was building houses in Pumula East, North and Pelandaba high density suburbs years ago. During that time, the lipoma was gradually growing.

On Thursday, Zimbabwe doubled the 1 000 mark of people who have been infected by Covid-19, with 2 124. A total of 1 129 being local infections and the rest among returnees. Zimbabwe has 510 confirmed recoveries and 28 deaths.