Parirenyatwa has responded to reports circulating on social media that they could not admit former RBZ Director Norman Mataruka who subsequently succumbed to COVID-19.

Reports circulating on social media are claiming the Manna Resorts owner was denied admission at Avenues Clinic and Borrowdale Trauma Center before he went to Parirenyatwa in need of a ventilator but the hospital reportedly failed to admit him as well.

According to Parirenyatwa Group of Hospitals, Mr Matarura was admitted at Parirenyatwa and the hospital staff did their best to stabilise him:

RESPONSE ON ALLEGATIONS OF FAILURE TO ADMIT MR NORMAN MATARUKA

We have taken note of a widely circulating social media article alleging that doctors discouraged Mr Mataruka from getting admitted at Parirenyatwa Group of Hospitals because the hospital was poorly equipped. Contrary to the article, the facts of the matter are as follows:

We also wish to inform the public that amongst other equipment , our COVID-19 Centre has 7 ventilators and a steady supply of oxygen. We appeal to the general public to desist from circulating unverified information as this exacerbates staff demotivation and also reduces public confidence in public hospital services. 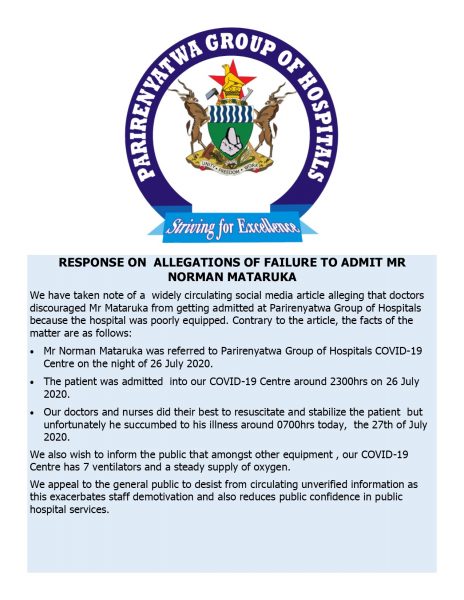