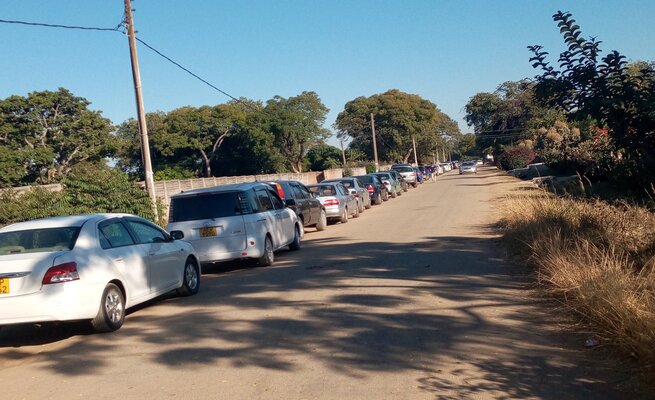 FRESH fuel shortages have hit the country and in Bulawayo most service stations have been dry for the past week.

A Chronicle news crew took to the streets of Bulawayo and observed motorists queueing for refills while at some service stations there was no fuel.

The Chronicle observed over the past few days that Zimbabwe Prisons and Correctional Services vehicles, Public Service Commission buses and other Government department vehicles were also in long fuel queues. Government last month said it was mulling a fuel facility for essential services and civil servants, but that has not been effected yet.

Due to the ongoing fuel crisis, some motorists said they were resorting to buying fuel from illegal fuel dealers who continue to thrive in the city with new selling spots sprouting.

The news crew observed a number of illegal fuel dealers selling the commodity in the city centre, despite the prevailing lockdown regulations which require people to stay at home.

The dealers can now be found selling in some suburbs such as Entumbane an Emakhandeni and they sell the commodity in quantities of five litres for as much as US$7 or R150, which translates to US$1,40 or R30 per litre.

A motorist, Mr Simanga Dube, who did not disclose his place of residence said he was afraid that when he finishes work without getting the fuel, he may be stranded at night going home. “I work in a supermarket in management and we close the doors to the public at 3pm and then clear remaining shoppers for the next 30 minutes or so. We clean up and do cashing and everyone leaves at around 5pm. Imagine going around with a car already showing a fuel low sign for two trips. if I don’t get fuel today probably, I will get stuck somewhere and then by curfew time police and soldiers will give me problems,” he said.

Another motorist who identified himself as Mr Nyasha Chirau said he had been looking for fuel for more than four days without luck and had left his car parked outside an Engine Service Station as it had run out of fuel.

“I am happy I can finally take my car home but we were only getting fifteen litres. I had to leave this car at the garage as the fuel was not enough to take me home to Mahatshula. I have been using a Zupco bus to get to work but the risk of getting infected with Covid-19 in the queues is high,” said Mr Chirau.

The Deputy Minister of Energy and Power Development Magna Mudyiwa said fuel shortages being experienced in the country were as a result of foreign currency shortages as Government was prioritising the fight against Covid-19.

She added that Government was working to ensure that deliveries were consistent countrywide.

“The fuel shortages are not unique to Bulawayo only but are a nationwide phenomenon. This is due to forex shortages we are experiencing. The national cake is too small; a lot of sectors need forex, and while fuel is one if the prioritised sectors, of late Government has been diverting the larger chunk of resources towards the Covid-19 fight. So resultantly, some sectors may suffer. To access fuel at Msasa, Government must have paid for that bonded fuel. So, the public must expect such challenges as the cake is so small and must be distributed among different sectors to keep the economy functional,” said the Deputy Minister.