“Clearly we must do something about what is happening. It is time that we take care of Zimbabwean lives that matter. We must be serious about the situation,” Chamisa said.

Chamisa visited both Chin’ono and Jacob Ngarivhume, the leader of the opposition Transform Zimbabwe party who had helped to organize the foiled July 31 protests.

“They are in high spirits and they really want to see a better country,” Chamisa said.

On Tuesday President Emmerson Mnangagwa gave a speech calling the main opposition party “terrorist,” and vowed to flush out opponents in an ongoing clampdown.

Scores of opposition members and government critics have been arrested and rights groups allege security forces have carried out illegal abductions and torture.

Mnangagwa described critics as “dark forces,” and “a few bad apples” that should be “overcome,” in an address on state television Tuesday.

In his speech, Mnangagwa, who rights groups accuse of using COVID-19 as a cover to clamp down on dissent, said Zimbabwe’s security forces would not relent.

“Security services will carry out their duties with appropriate astuteness and resolve. The protection of the right to life is paramount, especially in light of the COVID-19 pandemic and machinations by the destructive terrorist opposition groupings,” he said.

Meanwhile, the party of excellence, MDC Alliance issued a statement welcoming its leader Chamisa who had taken some time off work following the passing of his mother Gogo Alice Chamisa.

STATEMENT ON THE RETURN OF PRESIDENT NELSON CHAMISA

The MDC-Alliance welcomes back President Nelson Chamisa from his leave of absence.

President Chamisa took time to mourn his beloved mother and, shortly after, the sudden death of his uncle.

President Chamisa will resume his official duties on Friday 7th August. The People’s President extends his sincere and heartfelt thanks to the loving people of Zimbabwe and beyond for standing with the family during this difficult family tragedy.

The winds of change are calling. Zimbabwean Lives Matter. It’s time to win Zimbabwe for change. 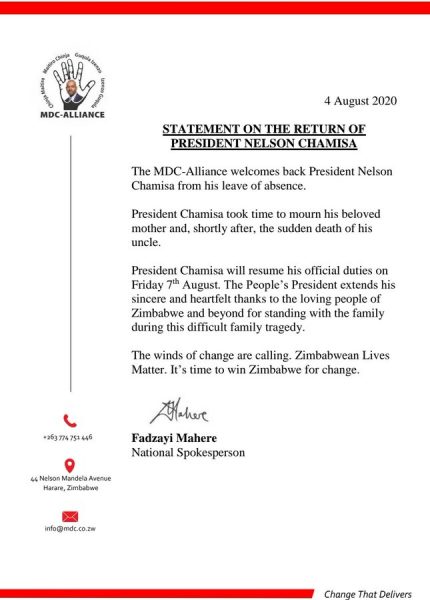