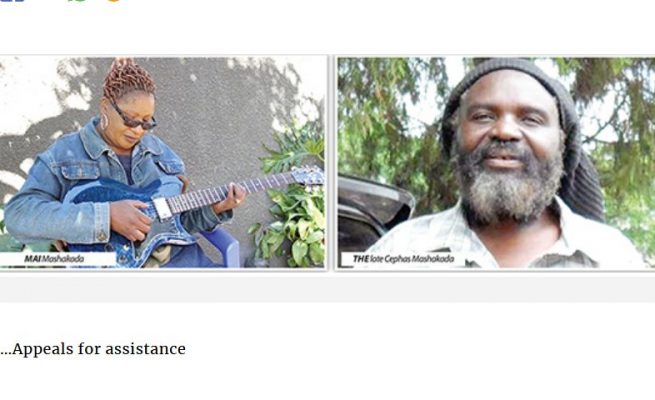 EUNICE, widow to the late Cephas “Motomuzhinji” Mashakada, is unwell.

Mai Mashakada, as the widow is fondly known in music circles and beyond, is down with a heart problem.

Owing to her condition worsened by the Covid-19 lockdown which has left her struggling to make ends meet, Mai Mashakada is unsure whether to commemorate her late singer’s ninth anniversary or not.

Prior to his death, Mashakada was amputated on his right leg just below the lower limp in 2006.

The burly singer had to endure five or so years with an artificial leg.

However, his condition deteriorated and he breathed his last in 2011.

It appears the Sounds of Muddy Face leader’s legacy has been interred with his remains since efforts to revive the singer’s music has hit a brick war.

With many people remembering their departed and living heroes/heroines in August, the same month national icons are celebrated in Zimbabwe, Mai Mashakada’s case remains a matter of conjecture.

In a telephone interview with H-Metro, Mai Mashakada said she was unwell at her Chitungwiza home where she stays with grandchildren.

“I still miss Cephas who died in August 2011 but I am now forgetting the exact date he died,” said Mai Mashakada who sounded to be in pain.

“Cephas died in 2011 and since then, I have been surviving by the grace of the Lord.

“With Covid-19 taking its toll world over, we are also not spared by its effects because we lost our sources of incomes.

“What I can only say for now is that I have been living by the grace of the Lord who knows where I will get the next meal.

“It does not look good at all and I am just praying that the Lord continue looking after us.”

With many people performing rituals like laying wreaths or appeasing the departed spirit during this time of the year, Mai Mashakada has no plan.

“I can’t say much because of this Covid-19 thing which has affected us badly.

“I keep on saying that we owe our lives to God and there is nothing much I can say.

“Right now I am worried by my condition which does not allow me to be stressed.

“Doctors said it’s related to heart failure and I can’t say much because I am unwell and I mean it.”

She also told H-Metro Entertainment that she has been staying with her four grandchildren who are helping her to perform household chores.

“I stay nevazukuru vangu, I am the one who is looking after them but it’s not easy with my condition.

“Ever since the death of Cephas, all has not been rosy for me and I am hopeful that I will manage on my own with the grace of the Lord.

“What I am sure about is that alone I will not be able to do it but only God has the answers to my needs.

“I’m sorry I can’t say more because I am unwell today (yesterday), I can’t talk to you further,” she said before hanging her phone.

Prior to Mai Mashakada hanging the phone, she said she appealed for help but was unsure who to approach.

“Yes, I need help to cushion myself and family on lockdown but I don’t know who to approach.

“I’m unwell and that’s what I can tell the rest of Zimbabwe at the moment.

“Covid-19 lockdown has left us with nothing and we pray every day that the Lord intervenes so that we are saved,” said Mai Mashakada who used to earn a living as a cross border trader.

Mai Mashakada used to travel as far as Angola on business before and after her husband’s death.

As has become a common phenomenon with most bands, Muddy Face’s revival has failed to take off owing to in house squabbles.

At one point Mashakada’s right hand man Shame Mashonganyika tried to revive the band without success.

Better known as Chibage, the phenomenal dancer and percussion virtuoso had a fallout with Mai Mashakada over the use of the group’s name.

Mai Mashakada wanted to be involved in the band’s affair which saw revival of the late Samson singer’s legacy suffering stunted growth.

As it stands, only a miracle will be needed to revive Mashakada’s legacy.

Surviving members of the Muddy Face have been desperate to revive their former paymaster’s legacy but to no avail as is the case now.