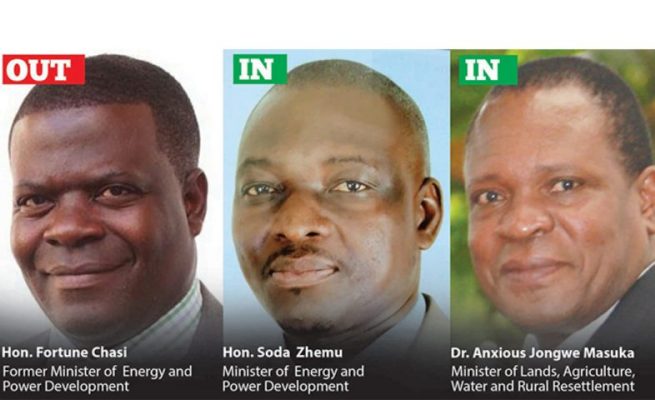 PRESIDENT Mnangagwa has fired the Minister of Energy and Power Development, Advocate Fortune Chasi for conduct not compatible with the President’s expectations.

He appointed Cde Soda Zhemu in his place and named Dr Anxious Jongwe Masuka as Minister of Lands, Agriculture, Water and Rural Settlement with immediate effect.

In separate statements yesterday, the Chief Secretary to the President and Cabinet Dr Misheck Sibanda said: “In terms of the Zimbabwe Constitution Amendment No 20 Act of 2013, His Excellency the President,

“Cde Emmerson Mnangagwa has appointed Honourable Soda Zhemu Member of Parliament for Muzarabani North as Minister of Energy and Power Development in place of Minister Honourable Advocate Fortune Chasi. The latter has been relieved of his duties in terms of Section 108 (1a) as his conduct of Government business had been incompatible with the President’s expectations,” said Dr Sibanda.

He said Dr Masuka’s appointment was in line with Sections 104 (1) and (3) of the Constitution of Zimbabwe.

He said Dr Masuka has a very impressive professional record which began in the teaching field as a lecturer at the UZ in the Department of Biological Department as well as the Zimbabwe College of Forestry between 1989 and 1995.

“His footprints are found at the following institutions, the Forestry Commission where he was a senior research board member.

He served in various capacities rising through the ranks from senior plant pathologist, head of Bio services department to general manager from 1995 to 2012,” said Dr Sibanda.

“He became chief operating officer and executive director at Arisen Holdings between 2013 and 2014 before moving on to the Zimbabwe Agricultural Society as its chief executive officer to the present.”

Dr Masuka has cumulatively sat on over 30 boards and associations from 1991 to the present including the Tobacco Industry Advisory Council, Zimbabwe Seed Trade Association, Agricultural Research Council, Nation economic Consultative Forum, university councils including as chairman of the UZ.

“He has been involved in consultancy work in the fields of agriculture forestry, environment, public health and rural development both here in Zimbabwe in the Sadc region and beyond. He is credited with innumerable publications and book chapters in Agriculture and related disciplines.”

News Muza Mpofu - 12 May 2021 0
AN EIGHT-YEAR-OLD Masvingo boy is battling for his life at Parirenyatwa Group of Hospitals after he was mauled on his face by a hyena...
Loading...