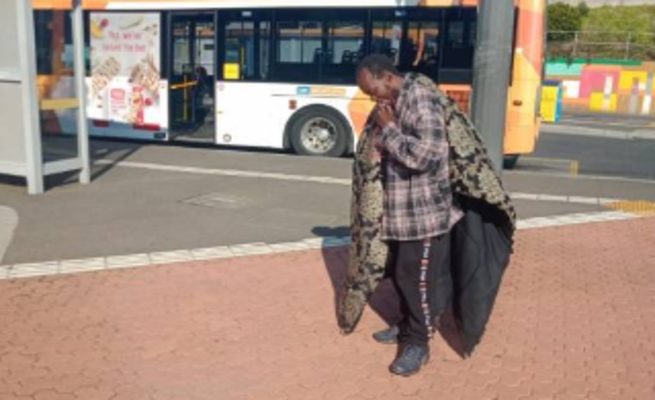 Socialite Mukoma Masimba, popularly known as Legend of Facebook, says he was not bewitched by anyone but his condition is controlled by a spirit.

Masimba has left his home and decided to stay on the streets of Melbourne in Australia.

He also confirmed to be having too many drugs with his friends, something he is working on.

This has left many well-wishers and concerned people worried about him with some sourcing for money to assist him.

While some think he has lost his sanity and others say he was bewitched by Sekuru Banda whom he previously challenged to show his powers. He is adamant that its depression and drugs.

He is famed for his shows “Go Deeper” and “Izalo NaMukoma Masimba” and being involved in many Facebook Pages.

Contacted for comment, Sekuru Banda could neither confirm nor deny the ongoing issue.

H-Metro contacted Mukoma Masimba from his new base who confirmed the situation but denied that it’s Banda who has made his life a ‘misery’.

“This is the spirit of Go Deeper which has put me on the streets.

“I have mixed with many people on social media and I have produced many shows where I share my opinions on my Facebook pages.

“I got possessed whenever I will be sharing my opinions, it’s a spirit, ndinosvikirwa nemudzimu.”

He said Sekuru Banda did not do anything to him but he is going under depression.

“So following this incident, he thinks his powers worked on me and made me in this situation.

“I deny that, he should not take advantage of my situation, I still challenge him and other witch-killers, muZimbabwe hamuna varoyi, ndini ndikudaro,” he said.

He said he left his home to go and stay on the streets.

“The spirit of Go Deeper sent me in the streets and its now three weeks.

“I even went to hospital for check-up, if I am not okay upstairs, how would they leave me to go.

“They only said its depression and there is plenty of food here on the Melbourne streets, there are many blankets.

“I am here in the streets smoking mbanje (marijuana) with my friends, the spirit requires mbanje.

“I am a drug addict, so we will be looking for money to buy mbanje.

“I have left my family and people are surprised to see me in this situation.

“I just told my wife to pack my bag and I told her that I am going to stay in the streets, muroad having madrugs

“And she questioned me, ndikati, mweya weGo Deeper, is inviting me in the streets.

“My wife packed the bag and I left,” he said.

Mukoma Masimba is adamant that Banda has done nothing on him.

“But Sekuru Banda is claiming that I am in the streets because of him after I challenged him.

“I am trying to stop drugs myself not what he is saying that he ‘sorted’ me.

“So this make me to challenge all the witches, witch-killers, sangomas that kana vane mushonga ngavauye apa.

“I am doing this because I have a message to Zimbabweans.

“All l know is l am homeless, drug addict and working on it. Sekuru Banda lied, havana zvavakaita pandiri.