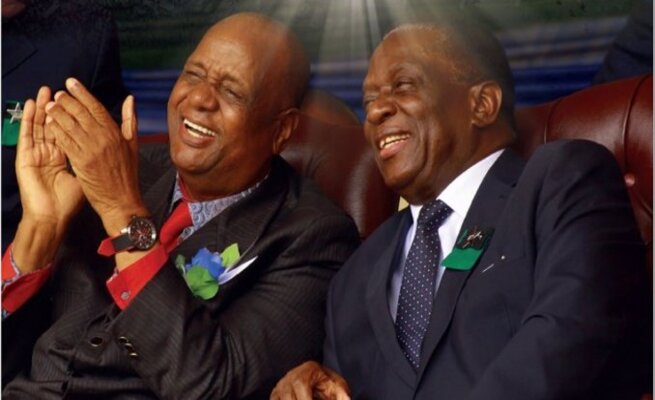 CONTROVERSIAL cleric Nehemiah Mutendi has hit out at the US government for allegedly working with white former commercial farmers to derail Zimbabwe’s land reform process in a bid to foment a citizen revolt against government by hungry locals.

The Zanu PF ally and Zimbabwe Indigenous Interdenominational Council of Churches (ZIICC) patron was addressing the media in Mutare earlier this week.

Mutendi also took time to harangue those who have criticised government for blowing billions of taxpayers’ money through loans to politicians, clerics and other loyalists to the ruling party.

The cleric was the biggest beneficiary among members of the clergy, with two loans of US$271 000 and US$315,600 for a grand total of US$586,600 during former central bank governor Gideon Gono’s controversial farm mechanisation programme back in 2007.

“…They say ‘you did not pay loan for a tractor yekurima sadza (to produce staple food). Keep these people hungry, they will be angry’ and who can rule angry people? Who can discipline an angry nation?

“If Mutendi ventures into farming and receives a tractor, he is corrupt. So, what will happen if I don’t do the farming?” said the Zion Christian Church (ZCC) leader.

The cleric said the recent placement on the US targeted sanctions list of fuel mogul and Sakunda Holdings director Kudakwashe Tagwirei was an attempt by the enemy to punish the biggest supporter of government’s command agriculture programme.

“There is a person called Tagwirei who was recently added on the sanctions list because he supports command agriculture.

“Some people advocated his arrest because they know when people go hungry, they will turn against each other,” said Mutendi.

Tagwirei was added on the sanctions lists by US government over alleged support of government corruption.

Mutendi said it was unfortunate that Africa was looted and stripped of its natural resources in broad daylight for over 400 years while bishops and prophets of the time looked aside.

“You have been told Zimbabwe is the breadbasket. Why not gold basket? Who is being fooled with bread? Your eyes are being focused on bread while others are focused on gold.

“You talk about looting and corruption. Can we define the two things, corruption unoisa maoko muhomwe uchihwanda (is a sly act) but who questions the looting of Africa for 400 years in broad day light while bishops and prophets were silent about it,” he said.

Mutendi said Zimbabweans have abandoned growing crops and reaping afterwards while concentrating their efforts on criticising their more industrious compatriots for tilling the land.

“It’s all about land, it’s about reaping, people of Zimbabwe have abandoned growing and reaping and embarked on talking without producing anything. They have forgotten who was occupying their land and for how long.

“They forget that these people (white former commercial farmers) did not bid farewell to say bye bye. These people were forced out and they are fighting so much for you not to use the very land you people seized. If anyone says let’s go to the land that’s the person we support as an indigenous church,” said Mutendi.

He said powerful people were those running big corporates full of money who could influence decisions in Zimbabwe from their distant bases in Geneva and America.

“Powerful people are people with money who can influence some decisions while in Geneva. Those who run corporates but living in America. They are represented by people they pay and they have created their agenda thus what scriptures say,” said Mutendi.

The cleric said his church has built schools using local currency with the help of locals.

“We built schools with bonds (local currency) with help from people in this country. There are some people who can say I want my salary Deutschmark or next month in Franc, US dollar or British Sterling and the money will come. Us we are not puppets of anyone. I don’t want to play politics because I was not called to be a politician. I can only pray for politician to make his senses right,” he said.