There was drama in Chitungwiza on Wednesday when a woman fell into a trance before revealing the source of her wealth.

The woman, only identified as Locadia, claimed that pr0stitution was the source of her money which enabled her to buy a house in Zengeza 1. 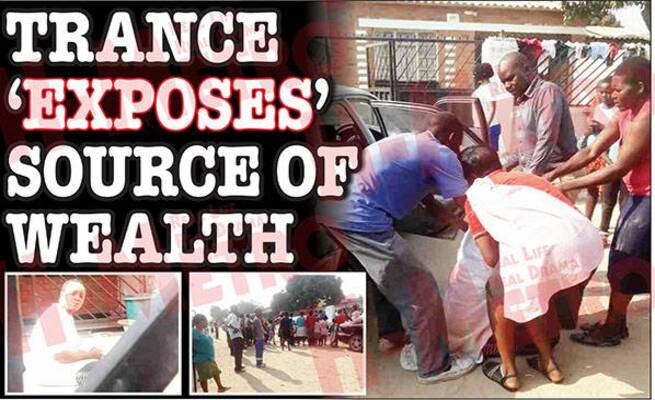 The incident attracted a crowd and no social distancing was observed.

When H-Metro arrived at the scene, Locadia was saying that she has been involved in pr0stitution for a while.

“I went to South Africa and did all sorts things. I was a pr0stitute and I stole money from a Nigerian man and used to buy this house that you see.

“This stupid man (her husband) only loves money. He doesn’t even know how I got this wealth. He is evil.”

“This house is not clean. Better to desert it. I am going, ichava dongo imba ino, and I hope it will be cleansed when I also get cleansed,” she said.

“My feet are not clean. I am dirty. I need to be cleansed.”

The woman went on to name other local men she has slept with. Some from the same street.

“I spent three days trying to write down the names of the men that i have slept with and I got tired. I couldn’t finish all of them,” she claimed.

In another shocking revelation, Locadia claimed that her husband was planning to kill her and their two children.

However, some residents took turns to approach her but they were all dismissed on grounds that they were unholy.

The husband had to go and call his mother-in-law who stays in Zengeza 3.

The mother was also accused by Locadia of being evil and didn’t want her close.

“However, some witnesses who were first at the scene believed that Locadia could have been possessed.

Another source close to the family said:

“This thing started last night. The husband told me that Locadia had a conversation with one Apostle(name withheld). She is said to have spent the whole night talking like this.

“I believe the husband might have touched some of her things or he is also a satanist as claimed by Locadia.”

Locadia was later taken by two unidentified men but was refusing to use her husband car saying it was an evil.

“Iwe ndisiye zimuroyi,” she was heard saying when her husband tried to touch her.

She later moved to the other car which had come with the two men.

After an hour the family returned and were seen taking some of her belongings.