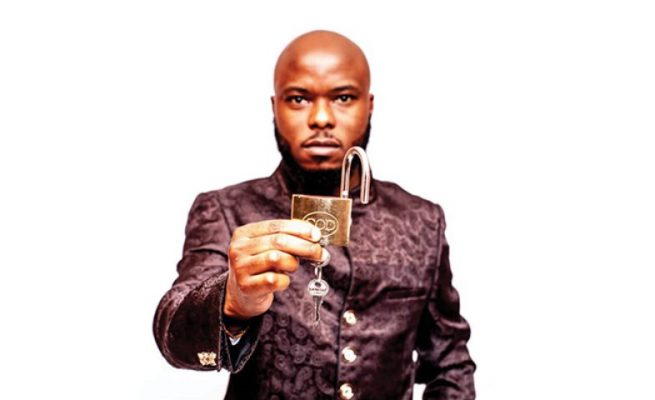 “I’M not a traditional healer or anything of that nature,” says Prophet Mduduzi “Black Elisha” Dube.

“When I lock someone, it is because he is unfaithful. This has nothing to do with dark powers but what is important is strengthening the institution of marriage which is one of the cornerstones of our religion.”

A marriage based on faithfulness is important to Prophet Dube. It is perhaps because he has hit the headlines in recent times, gaining a reputation for “locking” partners.

In June, Black Elisha became the talk of Bulawayo when our sister paper B-Metro reported that his house had been stormed by a man that had taken exception to a spiritual lock allegedly administered on him by the youthful prophet. His wife had sought the lock after she had grown tired of his philandering ways.

Instead of pleasing his mistresses as he had become accustomed to doing, the man allegedly found his manhood uncooperative. Faced with such a crisis, the man then reportedly stormed the prophet’s home, demanding that he reverse the “spell” that had rendered him impotent.

The prophet then obliged setting the man “free” on condition that he remains faithful to his wife, who he had been denying conju_gal rights since December.

“While pleading with his wife to let Black Elisha reverse the curse, he insisted that if his erection was restored, he would never do it again. He also confessed that he became aware that she had centrally locked him because whenever he tried to have se_x with other women his manhood would take a nap,” a witness reportedly said.

While that bit of theatre sent tongues wagging in Mpopoma, it also raised questions about Black Elisha and the practice of spiritual locking.

Some question whether this spiritual padlock was indeed true and effective, while others wondered where this suave 36-year-old prophet had got the power to pull off such an act.

The practice of “locking” partners has been whispered about openly for years. For some, it is just a myth, a mere legend used to scare unfaithful partners to stay on the straight and narrow.

However, for some it is real and tales of men who lock their wives before they go to work in other towns or neighbouring countries are not uncommon. Once in a while, newspaper headlines will scream of a man and woman stuck together during intercourse, usually as a result of a “locking” of one of the unfaithful duo by their partners. Rarely however, has such acts been known to have happened because of the work of a man of God, something which sets Black Elisha apart from the rest. This is why his credentials as a Man of God have been questioned by some.

The problem we have as Christians is that we want things to be merely spiritual without seeing their physical manifestation here on earth. I have merely turned the spiritual into the physical. I’m bringing substance to things that other people think should just be spiritual or theoretical,” he tells Sunday Life.

Black Elisha, who has been a prophet for 17 years, claims that the spiritual lock has always been an open secret. Until that disgruntled man had burst through the doors of his home in June, the world just did not know it yet.

“The spiritual padlock is something that has been there for a long time. People have just not known about it until this couple went public and brought me a lot of attention. I have been administering it privately for years, ever since I became a prophet. People just did not know about it,” he said.

Some have wondered where Black Elisha has gotten his powers while others are curious about who taught him to do what he does. His only answer is to point back to his past, when he began the long journey to become a fully-fledged Man of God.

“My spiritual journey started in 1999 and that was a time when I was in South Africa. I became a certified prophet in 2003. While I was interested in Ministry for a long time, I did not have people to mentor me until I got to South Africa. From that point however, there were four or five people that I consider my mentors who worked closely with me and helped me to attain a higher level of spiritual awareness. I think for their own part they saw that I was gifted and that’s why they took me under their wing. I can’t mention their names because these are people that don’t necessarily want to see their names in newspapers,” he says.

While his name has spread like wildfire recently, the publicity has a downside to it. People now flock to his Christ Life Generation Church in Magwegwe, to see the man who can lock unfaithful partners, not the prophet who has spiritual remedies for a lot of ills.

“A lot of people don’t understand that the spiritual padlock is not only about locking an unfaithful partner or marriage,” he says.

“Of course, we want people to be faithful and we also don’t want people to go out there and bring their partners diseases. However, the spiritual padlock serves other purposes. It is about unlocking people’s destinies, unlocking their business fortunes, unlocking potential. There are many people that I work with, particularly from outside the country, who don’t care about marriage at all. They use the spiritual padlock for other purposes. But of course, the locking of unfaithful partners is dramatic and so people will also be attracted to that.”