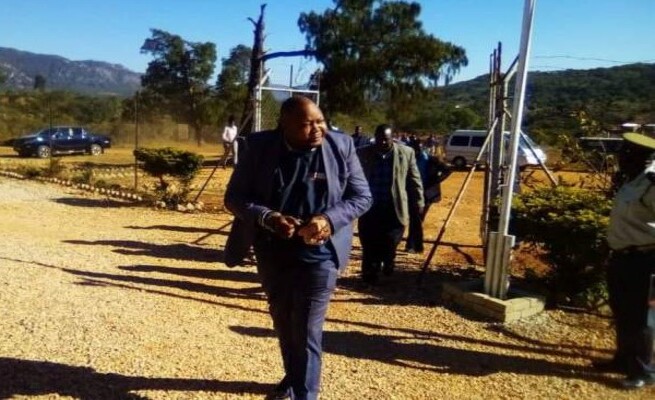 Sikhala had been on the run for weeks after he was put on the police wanted list among several other opposition political activists and civic society leaders for their role in the foiled July 31 anti-government protests.

Around midday on Friday, the DailyNews on Sunday witnessed a truckload of policemen armed with AK assault rifles and batons and in another white twin cab, ferrying plain clothes men invade the usually tranquil suburb of Tynwald North, searching for Sikhala.

When they arrived at a house where former Zanu PF MP for Hurungwe East Sarah Mahoka used to reside, a woman disembarked from the twin cab which drove off as the truck remained parked at the gate with the policemen knocking at the gate.

No one came out to open the gate for them. Upon getting no response, the law enforcement agents unsuccessfully tried to kick open the gate using booted feet creating a scene that drew the attention of locals who trooped out of their homes to get a glimpse of the act that had apparently disturbed the peace of the bewildered residents.

They then resorted to using the white truck they were driving to violently knock down the metal gate and gained entry.

After about 15 minutes, the policemen emerged from the house with a handcuffed Sikhala hardly visible as they surrounded him before they shoved him into the white truck and drove off followed by the twin cab that had resurfaced from the opposite direction.

After the incident, locals made a follow up at the house to find out from those who had remained what had transpired but got no response when they knocked at the broken down entrance.

This comes as the political climate in the country has remained tense following accusations of gross human rights breaches levelled against the government after authorities thwarted the planned July 31 mass protests. Sikhala had been in hiding since suspected State security agents began trailing him in the run up to the foiled July 31 protests.

In the last few weeks, the Zengeza West MP had rallied Zimbabweans to crank up the heat on authorities, after the government stopped the planned protests.

“I accepted the role to be with others in the quest for a corruption-free and looting-free society when people sharing the same vision with me invited me.

“When I accept that I will stand with you, I don’t betray you later. I promised my colleagues…who are under siege like me that we shall stand together with the people of Zimbabwe and I don’t betray what I promised.

“The demonstrations were basically citizen driven and I agreed to be one of their spokespersons.

“I could have been at my law chambers making money, but people’s interests supersede my personal interests,” the lawyer-cum-politician told the DailyNews on Sunday.

News Muza Mpofu - 29 July 2021 0
TWO hot-blooded Malawian soldiers were sent to a peace-making mission in the Democratic Republic of Congo. Instead of finishing their mission, they were sent packing...
Loading...