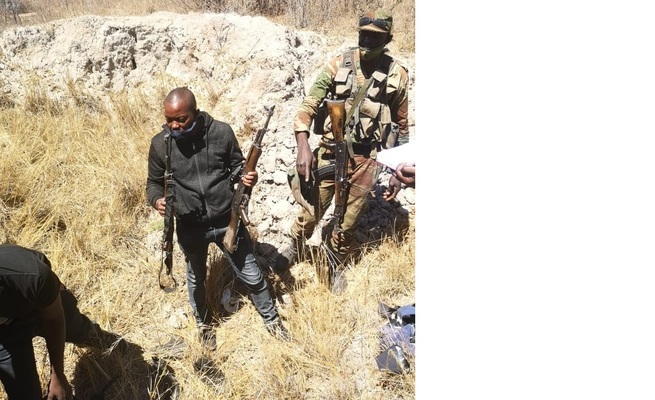 TWO yet to be identified people who shot Zimbabwe National Army (ZNA) officers, killing one and seriously injuring another in Chivhu on Saturday were yesterday gunned down by security forces in a dramatic exchange of fire.

In what movie scriptwriters may read with envy, the two suspects were brought to their knees following a sustained shootout with security forces, as they tried to flee. Investigators blew their cover right out at a mountain in Waterbury Farm where they were hiding. The dramatic shootout left one security officer nursing injuries.

After allegedly shooting and killing one soldier and seriously injuring another, the criminals disarmed them and ran away with the soldiers’ rifles and four magazines with 30 bullets each.

Security services responded by mounting a large-scale operation in and around Chivhu in an effort to bring them to book.

Vice-President Constantino Chiwenga last night visited the two soldiers who are admitted at West End Hospital in Harare, following the shootout with two assailants in separate incidents in Chivhu.

Corporal Peter Zvirevo and Corporal Stanalious Chiunye were transferred to Harare for further management. Corporal Zvirevo is critical and is admitted in the intensive care unit after undergoing an operation.

He was in the company of Lance Corporal Mupanganyama enforcing lockdown regulations in Chivhu when they were shot at a police post.

Corporal Stanalious Chiunye was part of the army and police crack-team on an operation to arrest the two assailants when he was injured in a shootout with the duo that was eventually killed.

VP Chiwenga, who is also the Health and Child Care Minister, was accompanied by his deputy, Dr John Mangwiro to West End Hospital.

Speaking to journalists after interacting with the injured, VP Chiwenga expressed confidence that the two would recover quickly.

He commended the doctors for working round the clock to ensure the two were in a stable condition.

“I am satisfied that the doctors have done the best they can,” said VP Chiwenga. “The operation on Zvirevo went on well.”

VP Chiwenga hailed the security forces crack team that accounted for the assailants in less than 24 hours after the shootout. “It is a great lesson to everyone in the country that such acts should not be done,” he said.

“Anyone daring to do such evil acts would be accounted for.”

The Vice-President expressed his heartfelt condolences to the family of Corporal Mupanganyama following his death. “We are really sorry about what happened,” he said.

“We lost a fine young man dedicated to his duty. We lost a soldier who was doing his job, protecting people at a time we are fighting this invisible enemy, Covid-19. He was not suspecting anything at all. What is good is that the two fugitives have been accounted for.”

In a tweet, Information Secretary Mr Nick Mangwana said, “ZNA’s Lorance Mupanganyama was murdered in cold blood while Peter Zvirevo sustained serious injuries in a Chivhu attack. Just like when Lee Rigby was killed in a similar attack in Britain or when Michael Zehaf-Bibeau attacked servicemen in Canada, we stand with our soldiers.”

“Following the tragic shooting of two security service members in a murder, attempted murder and robbery incident at Chicken Inn Police Base, Chivhu, on 5th September 2020 and the subsequent deployment of investigation teams, the security services inform the public that the two suspects have been accounted for after an exchange of fire at Waterbury Farm, Ward 8 Chivhu, off Chivhu-Gutu Road,” said Asst Comm Nyathi.

He said the suspects who were hiding in a mountain observed a security service team approaching and tried to run away.

Asst Comm Nyathi said they hid in a trench and exchanged fire with the security services and in the process one security service member was shot on the leg. “The suspects were then shot and seriously injured.

They were taken to Chivhu Hospital where they were pronounced dead on arrival,” he said.

Asst Comm Nyathi said the two service rifles and four magazines, which had been stolen by the criminals and the pistol they used to commit the murder, attempted murder and armed robbery were recovered from the scene.

The security services, he said, applaud the public for swiftly supplying information and co-operating with the investigation teams leading to the location of the two robbers.

“The security service reiterates that criminal elements who want to cause alarm and disturb the peace currently existing in the country will be decisively dealt with in terms of the country’s laws,” he said.