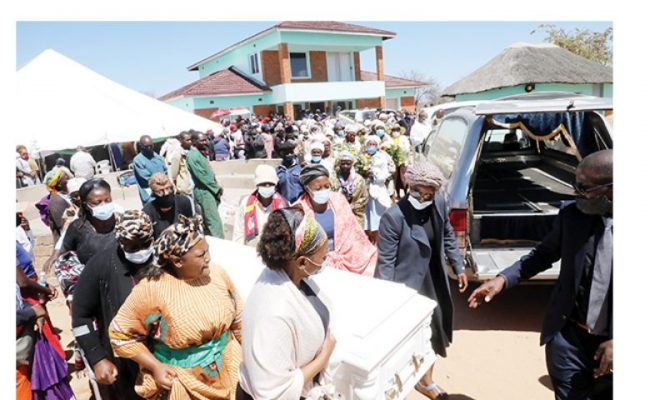 THE Mangwe District elderly couple who were gruesomely killed and burnt beyond recognition last week, were yesterday laid to rest in one grave at Empandeni Mission Cemetery in a heart tugging ceremony.

Their white caskets were put in one big grave just centimetres apart.

Nicholas Nleya (83) and his wife Margaret (78) are survived by ten children, 20 grandchildren and two great-grandchildren.

One could have mistaken the funeral for a burial of a national hero as people came from all corners of the country to pay their respect.

As testimony to the couple’s popularity and the extent to which their horrific death devastated the community, hundreds of mourners in more than 100 vehicles and four buses accompanied the remains to their final resting place.

Four big tents and five small ones were erected at the homestead to accommodate the mourners.

The decor, public address system and the catering could have fooled one into believing that the event was a celebrity wedding yet it was a funeral.

Mourners wept openly when the charred bodies that lay in state in sealed coffins overnight were taken outside the house in identical white caskets by Roman Catholic Church members.

The Archbishop of Bulawayo Diocese, Father Alex Thomas led a team of about a dozen priests in the last mass for the couple.

Most of the mourners were in tears when the couple’s children requested a song by Vusi Nova “Yibanathi.”

“Father be with us at a time like this and forgive our sins . . . ,” goes part of the chorus, which appeared to have touched the grief-stricken community.

Perhaps the most touching moment of the emotionally charged funeral was when the couple’s last child, Ms Thabisile Nleya, took to the podium.

She took the mic and slowly moved towards where her parents’ remains lay and then poured her heart out in a heart-rending eulogy as she addressed her parents as if they were still alive and could hear her.

“Sengizaba yini without you baba, without your guidance, without your teaching, all throughout my life you have supported my dreams. You taught me to be fearless in chasing them. I’m the woman I am today because of you baba,” she said.

“You were proud of your wife, you loved her all through her life and even death could not separate you. We have been left alone in the open,” she said.

Thabisile would break down, gather her strength and continue in a quavering voice that depicted deep anguish.

She turned to her mother.

“Ngizobayini ngaphandle kwakho? Kubuhlungu kakhulu, kubuhlungu ukuzwa ukuthi (What will I be without you? It is very painful, painful to hear) you were begging for your life from the killers. Ngidabukile mama wami. My heart is shattered into a million pieces which will never come back together again. You were our shelter, mama sengizakhalela bani mina? Ubuhlungu obungaka ngizabutshela ubani? (Who will comfort me? Who will I tell about this unbearable pain?) There is nothing left for me in this cruel world,” she mourned.

Almost every person in the crowd was moved by her speech. Some people choked back sobs while other cried out loud.

Some had one hand on their chins, for some it was folded arms, others just opened their mouths but no sound came out. Still others were constantly shaking heads while others drew meaningless patterns in the sand.

MDC-T leader, Thokozani Khuphe who was part of the proceedings opened her purse, took tissue papers, blew her nose and wiped tears from her eyes.

One of the children Mr Edmond Nleya said their parents prepared them for all the situations in life.

“They taught us all to be jacks of all trades. We can survive anywhere. If you put any of us in an office or you bring us to the farms we can adjust and do well. My father valued women and never raised a hand against my mother and I have taken that with me,” said Mr Nleya as he struggled for words.

Miss Nleya said knowing her mummy as she did, she forgave her killers before her death even though she pleaded in vain to be spared. She concluded by thanking her parents for their role in her life and promised to always love them.

Local priest, Father Victor Dube said it is only by looking at what Jesus went through on the cross that friends and relatives could understand what happened.

“We have two questions, the first one is why this happened and the second, is who did this? As Christians we can find answers to these question on the Cross where Christ was killed without having committed an offence,” said Father Dube.

Representing the Nleya family, Mr Patrick Nyathi said the late Nicholas Nleya held strong values which touched all who interacted with him.

“He was always the first to arrive at church and last to depart. We must all practice love, peace and forgiveness. Those are the strong values he held,” he said.

Representing the family of Margaret Nleya nee Dube, Mr Amon Dube said his sister was a great educator who produced many great people.

“It is sad that she buried her last sibling, her sister only last month. Margaret was the last born at birth and she has become the last at death as well as all her siblings are dead. Sifaka ihlahla emulini yakoDube. Kubi okwenzakeleyo njalo siyakuqala in our family for one of us to depart like this,” he said.

Mr Njabulo Ndebele who was the master of ceremony explained to mourners why they could not view the bodies.

“Those who came wishing to see what happened, I am very sorry. Emabhokisini lapha kulamalahle amabili, akuphumanga lutho, batsha baphela “There are only two burnt remains in the boxes. There is nothing. They were burnt to ashes). Let us accept that,” said Mr Ndebele.

Headman Zibuyeni, for the area, asked police to get to the bottom of the matter as villagers are living in fear.

After the service the long funeral cortège snaked to the community cemetery where the two were laid to rest side by side in one grave.

Even though the couple were killed in a senseless murder, the funeral was a celebration of their lives. The murders wrote the last chapter of the couple’s lives but the family made sure that they wrote the very last paragraph as the couple was buried with honour and dignity.