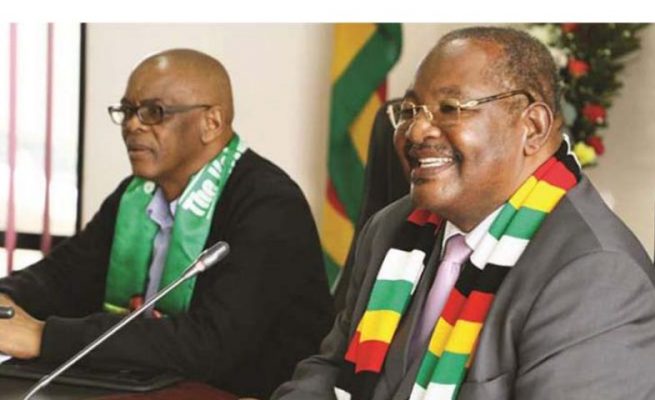 SOUTH African President Cyril Ramaphosa’s emissaries yesterday held a closed-door meeting with Zanu-PF officials and later indicated that they would be back in the country “in a month” to engage other stakeholders in Zimbabwe’s multi-faceted crisis, including the United States envoy.

The six-member team, led by African National Congress (ANC) secretary-general Ace Magashule, made the commitment after what it said “was a frank discussion” on the Zimbabwean crisis.

Zanu-PF has, however, insisted that the country is not in a crisis, and last month barred the ANC envoys from meeting other stakeholders.

Magashule said Zanu-PF had agreed after their meeting that his delegation could meet with other stakeholders.

“We had a frank, open and very robust discussion and committed ourselves to introspection. We agreed that at the centre of what we do as liberation movements should be our people who are still marginalised, poor and jobless with no water and no shelter,” he said.

“We agreed that as ANC, because now there is no time, we will come back to engage other stakeholders and political parties to understand and comprehend the challenge. We agreed there are challenges that are being faced in both countries.”

On human rights abuses in Zimbabwe, Magashule said it was the responsibility of liberation movements to protect the rights of the people.

Before the meeting, Magashule told journalists that he had received requests to engage other stakeholders.

“We have also received some requests to meet other stakeholders like Transform Zimbabwe, an opposition party, Dr Simba Makoni (Mavambo/Kusile/Dawn leader), the Zimbabwe African People’s Union, Zimbabwe Human Rights NGO Forum, MDC Alliance as well as the United States ambassador to Zimbabwe (Brian Nichols), but we felt, together with Zanu-PF, that indeed there is no problem meeting with their structures. So, therefore, we are going to make arrangements to once more come back and meet with these organisations,” he said.

The ANC secretary-general, who was last month publicly rebuked by Zanu-PF acting spokesperson Patrick Chinamasa for behaving like a Zimbabwean prefect after chastising Harare over gross human rights abuses, also said yesterday’s meeting was “first and foremost” to consolidate the two sister parties’ relations and also at government level.

“I am sure we are going to have open and frank discussions away from the media so that we engage on the challenges faced by the liberation movements. We will be able to engage frankly to appreciate the challenges, the poverty challenges of our economies, our people are hungry and deal with all those issues facing us,” he said.

The Zanu-PF delegation was led by the party secretary for administration Obert Mpofu and it included Simbarashe Mumbengegwi (secretary for external affairs), July Moyo (secretary for transport), Sibusiso Moyo (politburo member and Foreign Affairs minister), Central Intelligence Organisation director-general Isaac Moyo, who is a former ambassador to Pretoria, and other senior party officials.

Mpofu said Zimbabwean and South African ruling parties together with former liberation movements across the continent were faced with a common problem of “neo-colonialism”, hence the need to work in solidarity.

Mpofu said the two parties also discussed the issue of “fugitives”, in apparent reference to former Zanu-PF officials exiled in South Africa, whom he said were at the centre of peddling “fake news” about a crisis in Zimbabwe.

He maintained that there was no crisis in Zimbabwe though admitting they had had a “no holds barred” meeting with the ANC delegates.

Mpofu said the meeting also resolved to confront issues of corruption in both countries.

“The sacrifices of our departed and still living heroes of the liberation struggle still remain our source of courage and resilience to jealously guard our hard won independence and sovereignty from our colonisers,” Mpofu said.

“We should, therefore, trudge against the ever-evolving enemy in maintaining our solidarity, comradeship, trust and our togetherness, lest we perish.”

Zanu-PF has accused the United States of financing opposition actors to effect regime change in Zimbabwe, a claim rubbished by Nichols, who said Washington was committed to assisting Zimbabwe to achieve democracy and respect for human rights while also continuing support on the humanitarian front.

News Muza Mpofu - 8 July 2021 0
A fire broke out late on Monday on the premises of late Nigerian pastor and televangelist TB Joshua’s The Synagogue, Church of All Nations...
Loading...