MDC Alliance President Nelson Chamisa and one of his co-vice presidents, Tendai Biti have been warned to stop behaving like little children and immediately close their party’s violent cells before the state security agents swoop on them. 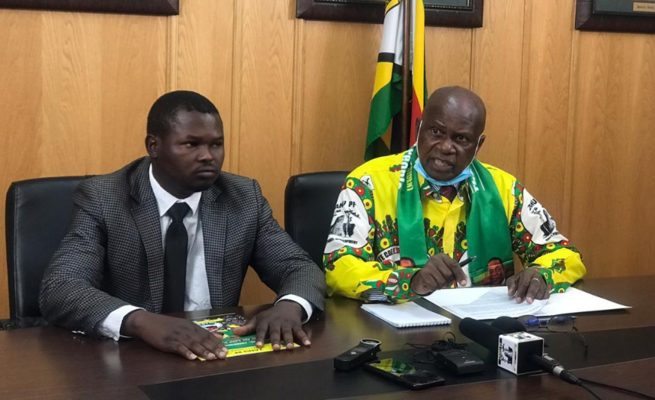 This, he said, was evident from how the MDC Alliance structures had “celebrated” last Saturday’s killing of a member of a Zimbabwe National Army (ZNA), Lance Corporal Lorance Mupanganyama at a police base in Chivhu by two men.

Two other soldiers, Corporal Peter Zvirevo and Corporal Stanalious Chiunye were injured, one at the police station and another, the following day during a shoot-out with the insurgents.

Both are receiving treatment at a private hospital.

“Zanu PF was devastated and disturbed by the shooting in Chivhu where one soldier was killed,” Chinamasa said.

“We are further taken aback by statements of discouragement and ridicule coming from the rank and file of the MDC Alliance where they appear to be celebrating the attacks on the security forces while pouring their hearts out on the assailants. We have taken note.

“I want to say to Chamisa and Biti, they should stop playing with fire. It is very dangerous for them. We know what they have been doing and we are not surprised by the stance they have taken.”

Chinamasa also accused the MDC Alliance of sending party youths to Serbia and Moldovia for military training ahead of the party’s planned sabotage attacks.

“We are aware the MDC Alliance has been training, sending to Serbia and Moldovia renegades who are being trained to prepare Molotov cocktails and come to cause mayhem and violence in our country.

“We all know the MDC is a party that loves violence and continues to maintain violent structures which they characterise as vanguards or resistance committees.

“I want to say to Biti and Chamisa, don’t play with fire like children. You must proceed forthwith to dismantle your violent structures. We also call Serbia and Moldovia, who host such violent training, that Zanu PF will not tolerate that.”

Chinamasa warned MDC Alliance that security forces were geared for it and should not raise any complaints.

“I am sure that when they do, we will account for them. Each and every one of them and there should be no complaining when people who have been trained in Moldovia and Serbia come to our shores and are accounted for. We should not receive any complaints from anybody including the US ambassador (to Zimbabwe Brian Nichols).”