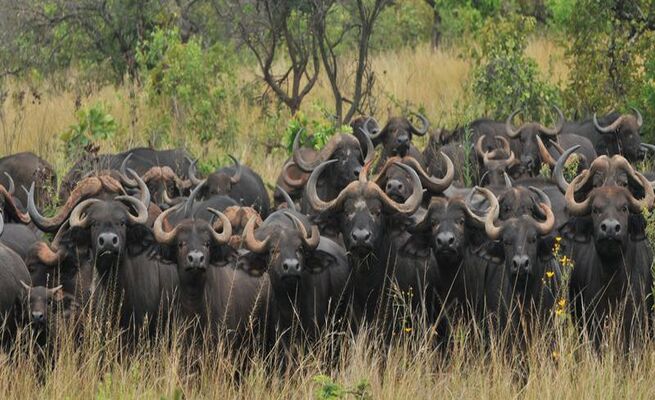 A herd of over 100 buffaloes has invaded Bulilima district in Matabeleland South causing havoc in the area and instilling fear among villagers, it has emerged.

Three of the buffaloes that had been for the past few days roaming around areas such as Makhulela, Huwana and Khame were recently killed by the Zimbabwe Parks and Wildlife Management Authority (Zimparks) rangers.

Bulilima Rural District Council CEO Brown Ncube said the local authority and ZimParks were doing all they could to contain the herd and protect people from the vicious animals.

“They are causing a lot of fear and are a threat to humans as you know they are dangerous animals,” Ncube said.

“But at the moment we have not yet heard of reports of people injured or killed by them.”

A report on human and wildlife conflict released by Habakkuk Trust stated that ZimParks rangers in the company of a veterinary doctor moved in to avert a crisis after local community members reported the invasion of their areas by the buffaloes.

“The buffaloes, which were visibly dehydrated, are in a desperate search for water as natural reservoirs in most areas have since dried,” reads part of the report.

“The buffaloes gunned down were in close proximity to households, one of them was shot as it was roaming around a granary.”

Indications are that the veterinary doctor had challenges in draining samples from the buffaloes’ carcases due to extreme dehydration.

“Tests for anthrax and other zoonotic diseases that can be transmitted to domestic animals will be conducted on the samples,” reads the report.

Villagers expressed fears of transmission of zoonotic diseases and the increased likelihood of human-wildlife conflict.

“We really have problems here, recently we had elephants causing problems and now a herd of buffaloes invades our area,” said a villager.

The villagers said the new developments reminded them of the 2018 incident in which an elephant trampled a villager to death.

Competition for natural resources is increasingly becoming stiff with communities calling for lasting solutions to the issue.

Habakkuk Trust is assisting communities in Bulilima to address the issue of human-wildlife conflict.