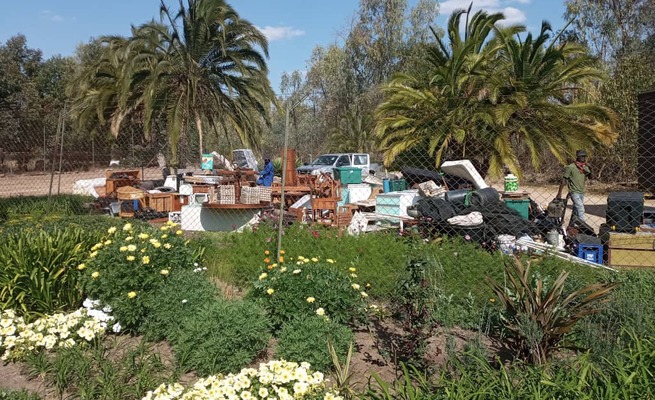 THE occupation of Buena Vista Farm in Goromonzi by new farmer Ms Ivy Rupandi is aboveboard following a long-running court process which culminated in Mr Martin Grobbler losing the farm.

Ms Rupandi was allocated the land in 2003 at the height of the Land Reform Programme, but faced resistance from Mr Grobbler.

The farm had been acquired by the State and gazetted for redistribution under the Land Reform Programme.

The battle for control of the farm spilled into the courts with Ms Rupandi on the strength of an offer letter from Government, seeking eviction of the Grobbler family.

On his part, Mr Grobbler filed numerous court applications in a bid to block Ms Rupandi from occupying the farm.

However, Ms Rupandi won her case and Mr Grobbler was evicted on the strength of a High Court order.

Dissatisfied with the court’s decision allowing his eviction, Mr Grobbler took the matter to the Supreme Court on appeal.

He lost the appeal, setting the stage for Ms Rupandi to execute the eviction order against Mr Grobbler.

Ms Rupandi’s notice of eviction was filed at the High Court on November 28, 2017 under case number HC 10633/17, but Grobbler continued to contest eviction when he applied for a stay of execution. But his appeal in the Supreme Court, under a SC 246/20 was thrown out after Justice Lavender Makoni on July 22, upheld the eviction order.

Meanwhile, Government says the continued occupation of two large farms in Goromonzi by a private company without tenure documents is illegal because the farms were acquired under the country’s land reform laws.

Lands, Agriculture, Water and Rural Resettlement Permanent Secretary Dr John Bhasera said the farms were State land and not privately-owned as claimed by the agricultural company.

He was responding to Whiteside Farms’ High Court application challenging the decision of the Land Commission declaring the two farms State land.

In its application for review, Whiteside Farms wants the court to set aside the decision and declare the two farms its sole property, whose beneficial ownership lies with Ketchwan Investments (Private) Limited that is cited as the second applicant in the matter.

The company is arguing that the decision was irrational and grossly unreasonable because the Land Commission chairman then, Mr Teddy Muzoroza, failed to apply his mind to all the facts and legal considerations placed before him.

The Commission is also being accused of failing to conduct a hearing into allegations by former Dynamos secretary-general Brian Kashangura, former Warriors head coach Sunday Chidzambwa and Learnmore Muzvidziwa — cited as second, third and fourth respondents in the matter.

The three, who are on the land allocation waiting list since 2014, carried out their own investigations on the land and established that former Governor of Mashonaland East, Ray Kaukonde, allegedly abused his office and allocated the gazetted farm to his sister identified as Thokozani Gwizo based in the United Kingdom without an offer letter.

It was the trio’s submission that Kaukonde and her sister purported to have bought the land from the previous white owners who are now domiciled in the UK.

Dr Bhasera contends that Whiteside Farms’ land was properly acquired in March 2006 and their continued stay on the farms without tenure documents is unlawful.

He dismissed claims by Whiteside Farms that their rights of protection of the law has not been violated adding that Whiteside Farms and Ketchwan Investments, “seem to enjoy creating stories out of the blue”.

Whiteside Farms, said Dr Bhasera, were entitled to compensation from the Government for improvements made on the farm only.

“The applicants (Whiteside Farms and Ketchwan Investments) have not been removed from the farms neither have they been despoiled of their immovable properties,” stated Dr Bhasera in his opposition papers filed at the High Court.

“The fifth respondent (Ministry of Lands) is baffled by the conduct of and allegations being made by the applicants. The land is State land and it does not belong to the applicants as of March 7, 2006 when it was acquired.”

He urged the court to dismiss the application for lack of merit.

In her opposing affidavit, Lands Commission acting chairperson Ms Tendai Bare stated that the commission decided the matter based on the written submissions of all parties concerned and written confirmation obtained from the Deeds Registry on the acquisition status of the farms in question.

“The first respondent (Lands Commission) maintains that its determination was regular in both substance and form in that it followed laid down procedures and considered submissions from both parties and the relevant authorities,” she said.

In this regard, Ms Bare argued that the Commission did not deprive the two companies of any rights in agricultural land, but merely confirmed the acquisition status of the farms in questions.

“The applicants may have been in occupation of the said farms for over 19 years, but that occupation is irregular given that the farms are State land and the applicants do not hold any tenure documents for the land,” she said.