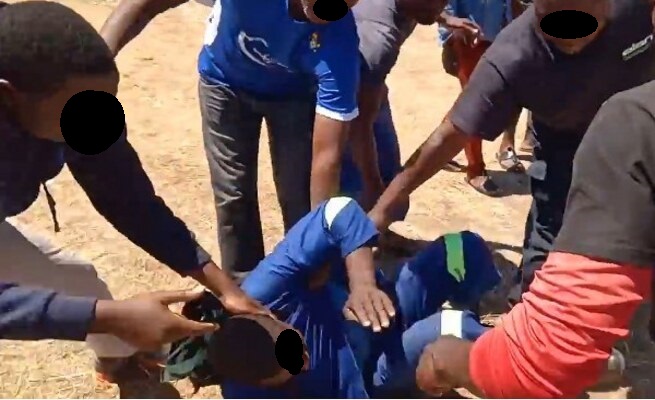 IF THEY had to take the law into their own hands to end violent crime, they would gladly do so.

These were the comments from angry residents of Alexandra, east of Joburg, who moered a boy and almost set him alight for allegedly attempting to rap_e a girl (7).

A local man told Daily Sun, four kids were playing near the river when a man grabbed one of them and started undressing her.

“The other three ran away and came and told me and my friends a man wanted to force himself onto the child,” he said.

He said they ran there and found the man about to rap_e the child.

“He tried to flee, but residents caught him and moered him.” he said.

“He admitted he wanted to rap_e the child. He said he had rap_ed others previously, but said he’ll never do it again if they gave him a chance to live.”

Jacob Dumakude (41) said: “We’re told police are doing their jobs, but we can’t keep seeing our women and children go through such pain and not getting justice.

“I hope this is a lesson to other criminals.”

Maria Sithole (51) asked how long must people wait for these criminals to go jail.

“They are arrested, but you later you see them walking around the streets,” she said.

Slindile Khoza (33) said she couldn’t imagine what she would have done if this man had grabbed her daughter.

The mother of the child was not ready to talk, but said she was grateful that the residents stopped the man from rap_ing her kid.

Gauteng police spokesman Captain Mavela Masondo said the 16-year-old is in hospital under police guard, after he was allegedly assaulted by residents who accused him of attempting to rap_e a young girl.

“Police welcome the assistance of the community in the fight against crime, but condemn any act of street justice and attacks on police,” said Masondo.

“The suspect will soon be appearing in the Alexandra Magistrates Court, facing a charge of attempted rap_e.”