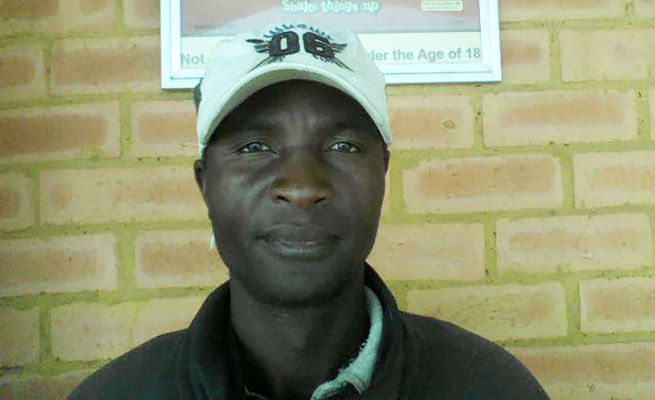 ‘Until when will the people of Zimbabwe eat the scabs of their wounds while the nation’s wealth is enjoyed by a few?’

ONE OF the Chivhu gunmen who shot dead a soldier was a Democratic Republic of Congo war veteran who often spoke of “freeing Zimbabwe”, according to friends and family.

Elliot Chihambakwe, of Gutu, also used his Facebook page to write a manifesto of change, demanding that Zimbabweans grow courage and “fix tomorrow for our children.”

Chihambakwe, 45, and his 20-year-old neighbour Ephain Jani were shot dead on September 6, just hours after the killing of Lance Corporal Lorance Mupanganyama and wounding of Corporal Peter Zvirevo inside a small police cabin in Chivhu town.

The motive for the attack remains unknown. 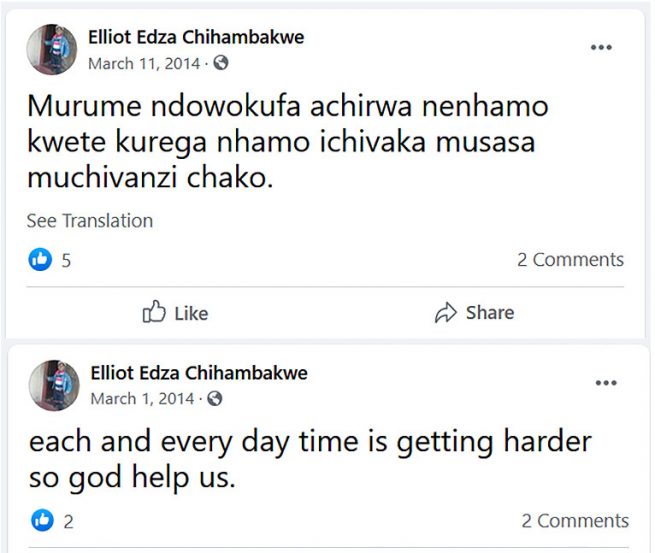 Chihambakwe and Jani were buried in Mukandatsama Village under Chief Mazuru on September 10 after being shot by a joint army and police team in a bush about 20km out of Chivhu town.

Friends and family have told ZimLive that Chihambakwe quit the army in 2008 at the height of a major economic crisis in Zimbabwe, and spent at least two years in Cape Town, South Africa, working as a security guard.

They say the married father-of-two harboured deep anger over the mismanagement of Zimbabwe by the Zanu PF government.

“He always told us that he would one day free Zimbabwe and cause an uprising,” a friend who lived with Chihambakwe in Cape Town said, asking not to be named.

On Facebook, Chihambakwe often wrote about his struggles fending for his young family. The posts began in 2012, when he joined Facebook, and then stopped suddenly in November 2017 – just days before a military coup that ousted the late former leader Robert Mugabe.

“Thanks to our cowardice, fear, we will die in suffering like strangers in the land of our fathers,” he wrote in November 2013.

“Until when will the people of Zimbabwe eat the scabs of their wounds while the nation’s wealth is enjoyed by a few? Until when dear friends will you live in those foreign countries where you are when you have your own country? Let’s fix tomorrow for our children,” he said in a November 2012 post.

Chihambakwe also said it was “better to die fighting for prosperity than to die in poverty.”

It remains unclear if his anger over the economic conditions in Zimbabwe led to the fateful September 5 incident, which would end with him and his young neighbour dead before their bodies were publicly paraded in Chivhu on the back of an open top police truck.

According to police, the two soldiers Zvirevo and Mupanganyama patrolled the streets of Chivhu starting at 8AM in the company of four police officers in a joint operation enforcing coronavirus lockdown regulations. The two soldiers were armed with AK47 rifles.

They then returned to a police base near a Chicken Inn fast food outlet – a small one-room cabin.

Mupanganyama, according to the police, had assumed that the man summoning him was his superior, and was furious when the man introduced himself as a former soldier. He stormed off and went back inside the police base.

“The purported ex-member followed the deceased into the police base talking to the deceased on top of his voice. All of a sudden, the other accused approached at the entrance of the police base and without saying anything he produced a corked pistol and started firing directly at the two army members,” a police report of the incident said.

Chihambakwe and Jani reportedly took away the two AK47 rifles and four fully-charged magazines loaded with 30 rounds each before walking out of the police base while pointing the rifles in the air.

Mupanganyama was shot three times. The fatal shot was on the nose with the bullet going through his head.

Zvirevo, who remains hospitalised in a critical condition, was shot six times – twice on the left hand, once in the abdomen and he also had three gunshot wounds to the back.

The two gunmen were tracked down by police and soldiers and located in the bush on September 6. Police said in an exchange of gunfire, the Chihambakwe and Jani shot a soldier in the leg before they were outgunned and killed.

A relative of Chihambakwe, speaking by phone, said the former soldier lived at the village in Gutu with his wife and children.

He said it remains unclear how he and Jani ended up in Chivhu. He dismissed suggestions that the two were panning for gold in the area.

Police had not given the family details of the altercation at the police base, which some reports claimed may have been over a woman.